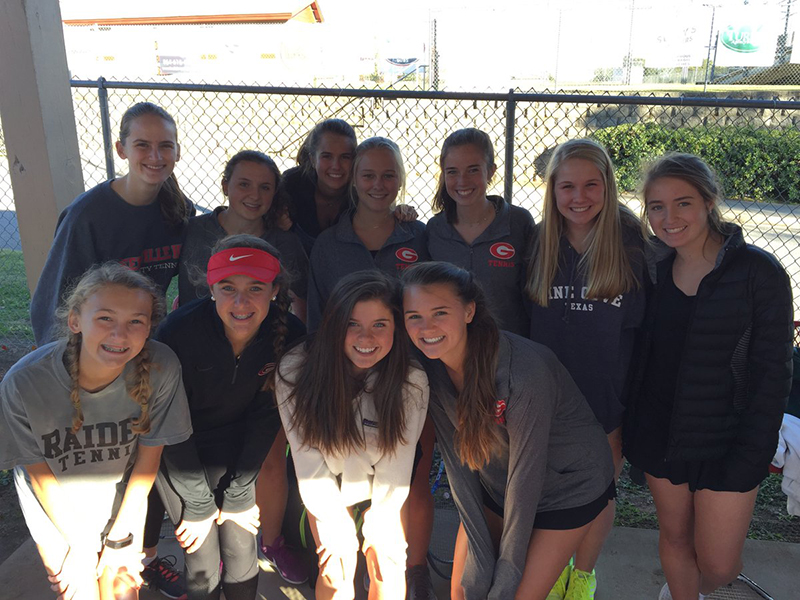 The Greenville Girls Tennis team claimed their first state championship since 1982 last season.  This season, the Red Raiders are young and hungry for a repeat title.  Greenville shutout their first three opponents of the Class AAAA playoffs, defeating Greer and Aiken 6-0 and Travelers Rest 7-0 to set up an Upper State finals vs region rival Daniel.  The Red Raiders feature two 8th graders in their top 5, including #1 Julia Price who took care of her set 6-4, 6-1.  The other middle schooler, Wylie Choplin, won #5 singles 6-2, 6-0. Greenville also got wins from #2, sophomore Layton Powell and #3 Emma McFall, a junior.  In the lone doubles match, senior Kate Keller and freshman Sophie Young won 6-1, 6-1 as the Red Raiders defeated Daniel 5-1 to advance to the state championships on Saturday where they will face AC Flora.  Head coach Mike McCuen hopes to bring home the teams second title in his three years as he continues to build a powerhouse in the Upstate.

Over at Sandhills, the state cross country championships will also take part on Saturday.  Class AAAAA Girls will take the first shot at the course as Riverside High hopes to maintain its dominance in Columbia.  The Warriors are looking for their fifth consecutive state title!  Sophomore Jessie Crowley, who won the Upper State Qualifier for the second time in three seasons, leads a young but deep squad featuring returning veterans like Carter Marchbanks and Anna Yang who were All-State last year, the third year in a row for Marchbanks.  They are joined by sophomore Laura MacGregor, 9th grader Kayla Harris and a pair of 8th grade twins, Katherine and Elizabeth Rogers.  The Warriors cruised at Upper State, scoring 32 points, 54 points better than 2nd place Dorman.  Mauldin's Macey Morgan put a small dent in the Warriors armor as she finished just behind Crowley to take 2nd place at the qualifier.  The Mavericks return an experienced group of runners who placed 5th overall in 2016 and look to climb the leader board and challenge the Warriors this season.  Wade Hampton had a strong showing to place 3rd at qualifying and Hillcrest (4th), JL Mann (5th) and Hillcrest (7th) will also run for a chance at the state crown.  Individually, Woodmont's Emma DeRoberts and Emily Michenfelder will join the field to race for an individual title.

The AAAA Girls are next on the course where defending state champion Eastside hopes for a chance to repeat.  The Eagles were just edged out by last years runners-up Daniel in the Upper State qualifier.  In fact, over the last two seasons the Lions and Eagles have been separated by a mere 7 points in the State and Upper State meets.  Olivia Henn (2nd), Cara Bognar (6th), Carson Davis (8th) and Madison Ellis (10th) all grabbed top 10 places at Upper State and will need similar runs to compete for a state title this year.  8th grader Taylor Houston hopes to lead the Greer Yellow Jackets into contention.  Houston has been solid all season and won the Upper State qualifier with a time of 18:40.23, which helped Greer qualify 5th as a team.  Travelers Rest landed at 4th and Blue Ridge 6th to also qualify for state.  Greenville just missed qualifying as a team, but runners Janie Schmitt, Abby Yager and Dargan Lapointe will race for an individual title.

After lunch, Class AAA will take the course where the Southside girls and boys team again qualified for state as a relatively young program.  The girls team placed 6th in the Upper State, led by Raven Stewart's 11th place showing.  Dan Whitten put up a top 10 time to finish 7th in the boys race and lead the Tigers to an 8th place overall showing.