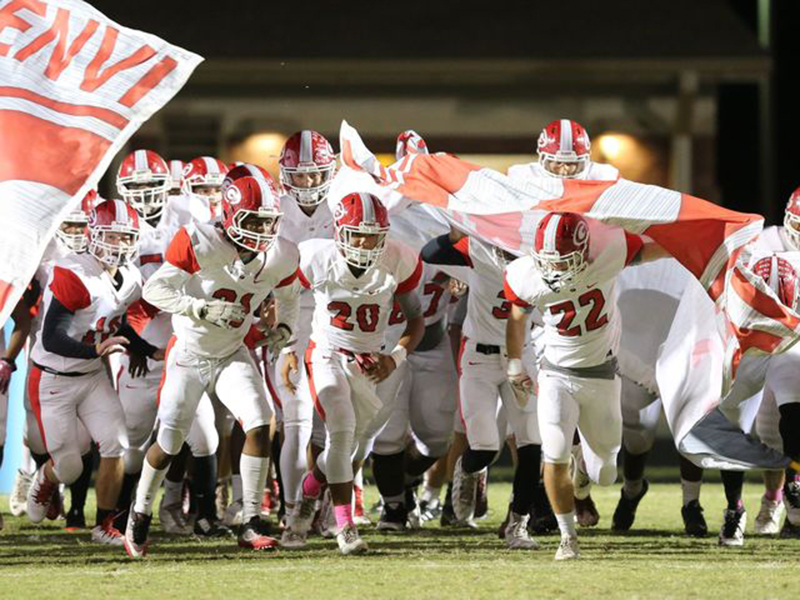 The high school football playoffs have arrived!  In the first round, the higher seeds generally did their job and protected home field.  One notable exception saw the Mauldin Mavericks travel to Rock Hill and knock out the Bearcats 27-7.  Mauldin went 3-and-out on the opening possession and the high tempo Rock Hill offense moved to midfield before turning the ball over on downs.  Defensive end playing fullback Shawn Livingston rumbled 50 yards and set the Mavs up with 1st and goal, Cris Paez played off the drive with a 3-yard TD run and the Mauldin defense kept the score at 7-0 through one quarter.  Both defenses played well in the 2nd quarter and after Mauldin pushed the ball inside the 5-yard line, the Bearcats held on 4th down forcing a turnover.  Pinned back deep, Rock Hill tried to pound the ball out of the end zone but Brendan Killough forced the ball free, close to the goal line and Thomas Tillotson scooped and scored for a 13-0 Mauldin lead at the half.  On their first possession of the 2nd half, Mauldin mounted a 12-play drive the ended with a 23 yard scoring run by QB Mitchell Norman.  Cris Paez added a second short TD following his own 53-yard rush as Mauldin took a 27-0 lead.  Mauldin’s defense held the high scoring Bearcats to 145 total yards of offense and only surrendered one score late in the game.  Brendan Killough added an interception to his forced fumble and Devin Scott added a pick for the Mavs defense.  Cris Paez and Shawn Livingston both rushed for a 100+ yards, the first 100-yard game for each this season, as Mauldin sliced up the Rock Hill defense for 346 yards on the ground.  Mauldin advances to face Dorman in Round 2.

The Cavaliers took care of business Friday night as the #1 seed out of the very challenging Region III-AAAAA.  Dorman hosted Woodmont out of Region 1-AAAAA and the Cavaliers used bug plays to build an early 28-0 lead.  The Wildcats fell 42-7 to end their 2017 campaign.

Hillcrest also rolled to victory as a #1 seed out of Region II-AAAAA and hosting Fort Mill.  After a defensive stop, the Rams went up top on their first play as QB Will Watts hit Trey Adkins for 43-yards.  The big play setup Donte Anthony for a 1-yard score on 4th and 1.  Fort Mill grabbed an 8-7 lead on a Boyle TD.  Watts found Steven Campbell from 15-yards as the Rams regained the lead, a lead they would not surrender going forward.  Anthony pushed the lead to 20-8 on a 56-yard burst.  The Yellow Jackets cut the lead in half, but Watts went up top to Jeremiah Talbert for 59-yards and Jamarcus Robinson hauled in a 67-yard pick 6 for the 34-14 lead.  The Rams added a late score and their defense shut-down the Fort Mill offense in the 2nd half for a 40-14 win.  The win marks 5 years in a row the Rams have gotten a playoff win.  From 1957-2012 Hillcrest recorded one playoff win.  Hillcrest will host Spartanburg next Friday.

Region II-AAAA saw four Greenville County teams take the field Friday night.  Top seeded Greer hosted Daniel in a rematch from earlier this season.  The Yellow Jackets needed only five plays to get on the board after Trey Houston connected with Matthew Huff for a 25-yard score and 7-0 lead.  After the Lions went 3-and-out, Dre Williams raced 58 yards, setting up a short Houston TD run.  Houston to Qua White made it 21-0 after the 1st quarter.  Daniel got on the board in the 2nd to make it 21-7 at the half.  The Yellow Jackets defense forced another quick 3-and-out to open the 3rd, White then grabbed a slant from Houston for a 58-yard score and 28-7 lead.  Dre Wiiliams 2nd TD run, a 32 yarder pushed the lead to 28.  Greer wrapped it up with a 12 play, 66 yard drive capped by another Houston TD run and a 42-7 Yellow Jacket victory.  Greer will host South Aiken on Friday at Dooley Field.

The #2 seed out of Region II-AAAA Eastside hosted Wren for the second week in a row.  Eastside won easily in Week 10, but the Golden Hurricane came to the playoffs with a lot more fight.  QB Jordan Morgan gave the Eagles an early 7-0 lead on a rushing TD, but Wren took an 8-7 lead into the 2nd quarter after a Tyrell Jackson TD toss.  Morgan added a second TD run, but the Hurricanes answered with a Jackson TD run as the two QB’s went back and forth.  Morgan closed the half with a pair of TD tosses to Payton Mangrum and Daniel Baldwin as Eastside held a 28-15 lead at the half.  Morgan opened the 3rd with his third rushing score and Joe Bontrager added a 32-yard FG to give Eastside a 38-15 lead.  Chance Pride opened the 4th with a short TD run and Eastside went on for the 45-23 win.  Thanks to a #4 Westwood upset over #1 North Augusta, Eastside will host their round 2 matchup vs Westwood.

As the #4 seed in Region II-AAAA, Blue Ridge had to travel to Greenville to face the high scoring Raiders.  Greenville quickly proved why they are a #1 seed and one of the best offenses in the state.  Davis Beville opened with a pair of TD tosses to Mack Braswell.  Beville to Ty Hellams for a long score made it 22-0 and the route was on.  Beville’s 4th TD went to TE Jimmy Fritzchse.  The ground game got rolling after scores by Danyaus Williams-Byrd and Colin Wakefield.  Blue Ridge did get a couple scores, including a TD from QB Jake Smith who left last weeks game on a stretcher and a 92-yard kickoff return by Tyree Cofield.  Smith was also picked off for a score by Prince Glenn as Greenville built a 50-12 lead at the half.  Williams-Byrd added another rushing score in the 3rd and backup QB got in on the fun with a 60 yard score on a botched snap recovery.  Greenville won 64-18 and will host York next Friday at Sirrine.

In Class AAA, #4 Southside traveled to #1 Fairfield-Central.  The Griffins raced out to a 14-0 lead, which included a tricky double pass for seven.  Tigers QB kept Southside in the game when he hooked up with Jayden Shell to cut the lead to 14-8 right before half.  Calhoun and the Tigers had opportunities in the 2nd half, but couldn’t quite overtake the Griffins as Southside’s season ended 29-22.