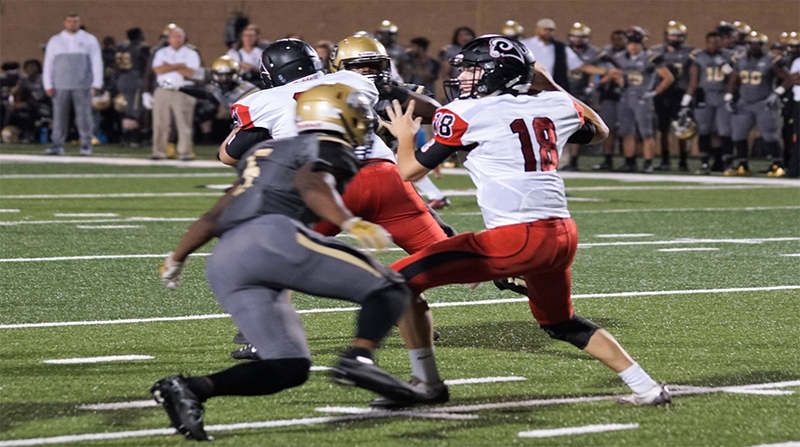 We have reached the point of the playoffs where every game is a huge game!  Still, something special about Greer vs Greenville with a birth in the Upper State Finals on the line at Dooley Field.  These two teams have split their last 12 matchups right down the middle, including a 27-19 win by the Yellow Jackets earlier this season.  The teams have met on this stage before, including 2003 when Greer came back to defeat Greenville 35-34 in the 3rd round on their way to the Class AAA State Title.  Greer knocked the Raiders out of the 2004 playoffs as well, but Greenville got them back in 2005 knocking Greer out in the 1st round.  It was the last time the two teams met in the playoffs.  Both teams enter as region champions with identical 11-1 records.  Greenville comes in averaging around 46 points per game, Greer right at 45.  Greer's defense has only allowed 13 per game, Greenville right around 15.  Greenville QB Davis Beville threw for 2108 yards with 29 TDs and only 3 interceptions during the regular season.  Greer QB Trey Houston threw for 1632 yards, completing 74% of his passes with 24 TDs and no interceptions.  Each team boasts a 1000 yard rusher, Dre Williams from Greer led the county with 1230 yards, not far behind was the Raiders Danyaus Williams-Byrd with 1105.  Each receiving corp boasts explosive playmakers.  Greenville's duo of Ty Hellams and Mack Braswell have combined for over 1400 yards and 20 TDs.  The Jackets Quavian White is a Shrine Bowl All-Star who had 9 TD receptions while also scoring on the ground, kickoff and punt returns this season.  It is a really evenly matched battle and despite all the star power on both offenses, this game is likely to come down to which defense plays better.

The winner of Greer-Greenville will advance to the Upper State Final to face either defending state champion South Pointe or the surprising Eastside Eagles who also sit at 11-1 with their lone loss coming at Greer.  The Eagles have been outstanding on offense all season.  QB Jordan Morgan, a North/South All-Star selection threw for more than 3300 yards and 41 TDs this season.  He has weapons all over the field with a pair of 1000 yard receivers in Chance Pride and Payton Mangrum.  Morgan also has the reliable hands of Daniel Baldwin, big play ability of Havan Berry and a solid ground game featuring Reggie Rodgers.  Morgan can also use his legs a little, scoring three rushing TDs just last week vs Westwood.  Eastside will need all those weapons as they face undefeated South Pointe.  The Stallions have one of the best defenses in the state, led by Shrine Bowl DE Eli Adams and North-South All-Star DB BJ Davis.  The South Pointe offense hasn't been held under 40 points since September, with Shrine Bowl QB Derion Kendrick connecting with weapons like North-South All-Star WR Steven Gilmore, Jr.  Eastside got a great effort from its defense last week vs Westwood and the Eagles D has been solid, flying under the radar all season.

In Class AAAAA, Hillcrest gets a shot at revenge vs the last team to defeat them.  Gaffney defeated the Rams 42-7 at The Reservation in week 4.  Since then QB Will Watts has found his groove, throwing for more than 2800 yards and 29 TDs to finish the regular season.  Watts has speed all around him, including WR's Quen Jefferson, Jeremiah Talbert, Trey Adkins and Steven Campbell.  Talbert is a state track champion who has 11 TDs on the season.  Behind Watts, backs Collin Whitfield and Donte Anthony have combined for over 1000 yards and Anthony is coming off a huge four TD game vs Spartanburg.  The Indians (8-4) have some weapons of their own, including Shrine Bowl RB Cameron Rice and Shrine Bowl WR Dennis Smith.  LB Garrett Sayegh, a North/South All-Star himself, and the Rams defense has been outstanding recently, including holding a high-powered Spartanburg team under 200 total yards a week ago.  Winner of this game will meet the winner of Dorman/Greenwood in the Upper State Finals next Friday.