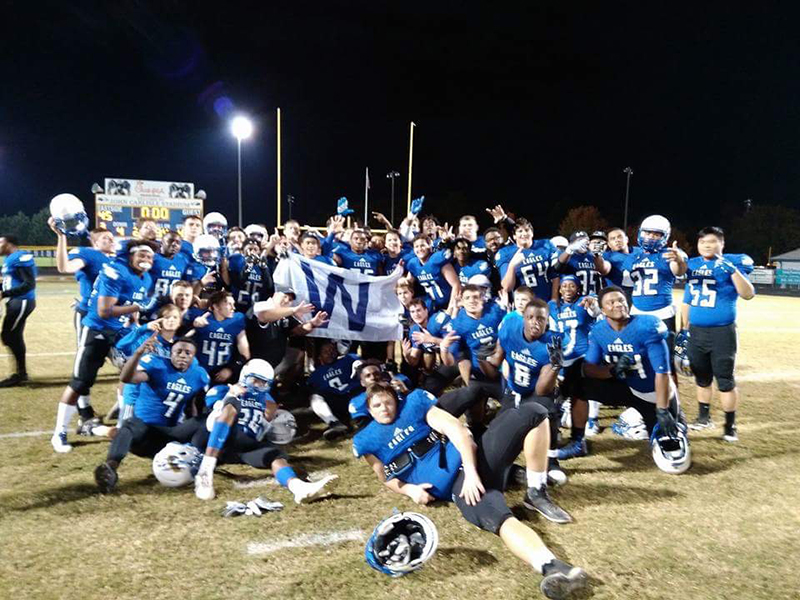 Survive and advance! Five teams from Greenville County Schools managed to do just that and now the competition starts to ratchet up.  Greenville got 4 touchdown throws from QB Davis Beville as the Red Raiders moved to 10-1 on the season and dispatched of cross-county foe Blue Ridge in round 1 of the AAAA playoffs.  The win sets up a 2nd round matchup with the 9-2 York Cougars, the #2 seed out of a very difficult Region III-AAAA.  York also cruised to a round 1 win, 55-14 over Airport.  York enters this week scoring around 38 points per game behind a strong rushing attack.  The Red Raiders have been strong on defense, only surrendering 14 points per game to complement their well balanced offense that has put up more than 500 points on the season.  Beville has weapons all around him, including WR's Ty Hellams and Mack Braswell and a two headed ground attack featuring 1000 yard rusher Danyaus Williams-Byrd and Colin Wakefield.  North/South All-Star Cam Thomason anchors the OL.  Kickoff is 7:30 pm on Friday night at Sirrine Stadium.  The winner advances to the 3rd round to face the winner of Greer and South Aiken.

Greer (10-1) got a balanced offensive attack as they defeated Daniel for the second time this season, 42-7 to open their playoff run.  In the 2nd round they will host South Aiken (9-2) which comes into the game having scored 40 or more points in 5 of their last 7 games.  The Thoroughbreds put up 47 against a good Ridge View team in the 1st round of the playoffs.  Greer's defense has been outstanding this year, slowing down high powered offenses like Eastside and Greenville earlier this year.  The Jackets will need to keep the Thoroughbreds corralled and hope their own horses can continue to produce.  QB Trey Houston runs the Yellow Jackets spread-attack and he has a Shrine Bowler in Quavian White on the edge who is capable of big plays on offense, defense or special teams.  Dre Williams flanks Houston in the backfield.  Williams is an explosive back who averaged over 11 yards per carry and put up 1230 yards rushing this season.  Houston added nearly 600 yards on the ground and put up 1632 yards through the air in the regular season with 24 touchdowns and 0 interceptions.  Kickoff is Friday night at 7:30 at Dooley Field.

After Eastside (10-1) dispatched of Wren to open the AAAA playoffs, the Eagles were thrilled to learn that they will be hosting their 2nd round matchup with Westwood (6-5).  The Redhawks went on the road in round 1 and upset #1 seed North Augusta.  All season the Eagles have been powered by their high flying aerial attack offense.  QB Jordan Morgan is a North/South All-Star selection after completing 75% of his throws for 3376 yards and 41 TDs to only 4 INTs in the regular season.  The Eagles have weapons all around Morgan, including 1000 yard receivers Chance Pride and Payton Mangrum who each caught 14 TDs this season.  Daniel Baldwin added 7 TD receptions and over 600 yards, while speedster Haven Berry scored 5 times and averaged over 24 yards per reception.  The Eagles defense hasn't been too bad either, giving up only 154 points on the season and giving up one score or less six times.  The Eagles will host the Redhawks Friday night at 7:30 at John Carlisle Stadium.

In Class AAAAA, Hillcrest (9-2) won a playoff game for the 5th year in a row.  That mark is important considering the Rams won only one playoff game in their first 55 years of playing football!  Hillcrest defeated Fort Mill in round 1 40-14 and got another strong outing from QB Will Watts who has improved every week after being given control of the offense.  In Week 1, the Rams were unsettled at the QB position as Watts battled backup Ethan Beamish and wildcat option Quen Jefferson for snaps.  Since then, Watts has thrown for 2500+ yards and 27 touchdowns.  Watts has skill guys with speed, including track state champion sprinter Jeremiah Talbert, on the outside who hauled in 10 TDs during the regular season.  The Rams will need that speed as they face a dangerous Spartanburg team who knocked off #2 seed Westside in the 1st round.  The Rams have never beaten Spartanburg, 0-19 record.  If they hope to advance to the 3rd round they will need to get that first W vs the Vikings at home on Friday night.

Mauldin (7-4) had to travel in round 1 to Rock Hill to face the #2 seeded Bearcats.  The Mavericks got another stellar effort from their defense as they held Rock Hill to 145 total yards in a 27-7 win.  The pleasant surprise for Mauldin was a ground game that churned out over 300 yards and featured two backs hit the 100 yard mark.  Shawn Livingston and Cris Paez each carried the ball for 100+ yards for the first time this season.  Paez added two rushing TDs and QB Mitchell Norman scored a third rushing TD.  The Mavs defense contributed the other score after Brendan Killough stripped the ball and Thomas Tillotson recovered and walked into the endzone.  Mauldin travels to Dorman (9-2) to face a Cavalier team that has not lost since August.  Dorman's explosive offense squares off against a stingy Mavs defense at "The U" on Friday night.