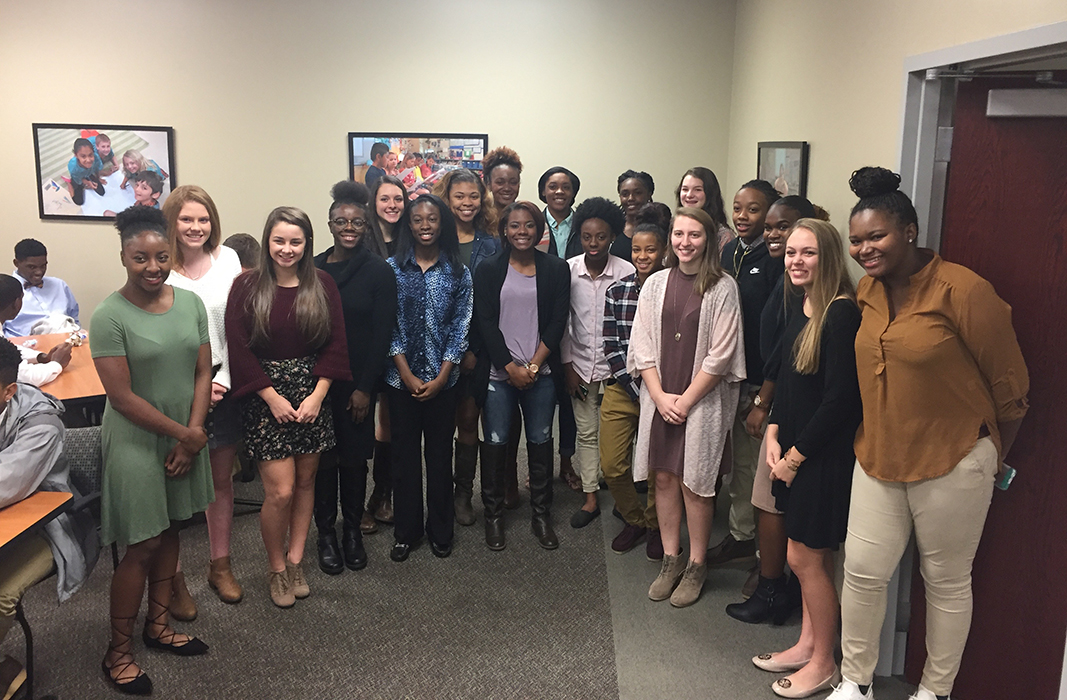 The 2017-18 high school girls basketball season has arrived. Last year two Greenville County teams fought their way to the Upper State Finals, with Wade Hampton advancing to state before finally running into the buzzsaw that was Goose Creek. Wade Hampton looks like a contender again in Class AAAAA, but who will they be contending against? Let’s preview all of the GCS teams:

Wade Hampton returns right players and four starters from their state runners-up team. Alexis Burnside was the only senior starter to graduate. Leading scorers Greyson Boone, Erin Dillard and Bre Watts all return, as do leading rebounders Alexis Guthrie and Brittany Shipman. This group of returning seniors brings experience, leadership and talent to the table. Sophomores Lamia Sweet, Carmela Hughes and Olivia Jurlick look to bring youth and depth off the Generals bench. Expectations are high for head coach Eric Burrow’s team. Coach Burrow’s wants his girls to learn from and build off last years run and to give maximum effort for 32 minutes every night. Wade Hampton opens their season at home on December 1st vs Eastside.

The Rams went 13-10 and grabbed the number two-seed out of their region last year despite not having any seniors on the team. The experience gained last year, despite a disappointing 1st round loss in the playoffs, should have the Rams pushing to challenge Wade Hampton for a region title. Senior PG Quin Byrd returns after leading the team in scoring last year. She’ll be joined in the backcourt by sophomore Katie Pettinato who finished second on the team in scoring here freshman year. Top rebounder Ayannah Harris enjoyed a very productive freshman year in the post and she’ll team with SF Erica Leamon to again provide the Rams with an inside presence. Juniors Alexis Hargrove and Shuneiye Bloom will also be key contributors and be counted on to provide leadership with Byrd and the other upperclassmen. Hillcrest is still a fairly young team, but they had a lot of success and gained a lot of experience last year for Coach Christine Szkotak and the Rams look to be even better in 17-18. Hillcrest opens their season December 1st at home vs Spartanburg.

New head coach Nena Creech Stone inherits a team that finished 13-10 and grabbed the 4-seed out of Region II-AAAAA last season. Coach Stone and her new staff are getting players to buy into her system and to be positive to changes occurring within the program. PG Anika Simpson was a key loss for the Mavericks, but senior Kiara Austin is ready to handle more of the backcourt responsibilities this season. 5’11” Senior Eboni Brown will be relied upon to give the Mavericks a powerful post presence and G Ashia Austin joins the Varsity squad and is ready to contribute. Mauldin opens their season December 1st at powerhouse Dorman.

2016-17 was a down year for head coach Jenny Taylor, now in her 16th season at the helm for the Warriors. A young Riverside squad finished 6-17, but the Warriors return their top two scorers and leading rebounder this season. Senior Sarah Cline led the team in points and Natalie Boulos was second as only a sophomore last year. In the post, senior KeKe Martin returns after leading the team in rebounds. Abbey McGrath and sophomore Abby Thompson also gained experience last season and look to have a bigger role in 17-18. Riverside opens their season November 28th vs Blue Ridge.

The 2016-17 Raiders featured two of the most dynamic scorers in the state with Savannah Hughes and Madisen Smith. Hughes and Smith helped carry Greenville to the Upper State Finals. Hughes has graduated, but Smith returns having recently committed to West Virginia University where she will continue her career after high school. Smith is a dynamic guard and a threat to beat you deep or blow by a defender and score in the lane. Greenville will have to replace their top two rebounders, Raina Hall and Kamiyah Irby. Senior Gabby Salazar is expected to fill that void in the post. Mon’yai Eichelberger, Trinity Franklin and Taylor Pace will all be contributors on the perimeter with Smith. Pace and Franklin are two of the five freshmen who will dress Varsity for the Red Raiders. Greenville opens their season November 28th at home vs Christ Church.

Head coach Mazzie Drummond enters his third season leading the Jackets, which means it will be his first season without all-star Diamon Shiflet. Shiflet led Greer in scoring last year and the Jackets also lose leading rebounder Marshea Murray as well as Tori Henderson off a team that finished 21-5 and took the 1-seed out of Region II-AAAA. Seniors Megan Jones (2nd in scoring) and Shakaiya Bradford (2nd in rebounds) return and will look to slide into the leadership role vacated by Shiflet. Seniors Nyia Williams, Sierra Carter and junior Caroline Littlefield will all be asked to take on a bigger role in 17-18 as the Jackets look for a consistent offensive presence. Greer opens their season at home vs 5A power Dorman on November 28th.

There are few constants in the game of basketball. For the past 36 years one constant on the Eastside sideline has been the presence of head coach Cindy Mattos-DeHart. Coach Mattos DeHart went 19-8 a season ago, but returns in 17-18 with a young squad. Two key figures do return for the Eagles, leading scorer and second leading rebounder Kennedy Taylor and leading rebounder Emily Brown. Brown and Taylor will assume a large leadership role this winter. Demya Scott, Davis Bailey and Taylor Nutzman will all be counted on as well. Eastside is young and quick, but according to Coach Mattos-DeHart, “success will be determined by their (the young players) ability to learn the system.” A system that has worked for three+ decades! Eastside will their season at home vs Berea on November 28th.

After finishing third in region last year, Coach Lindsay Baber has high hopes in 17-18 as she returns her “most cohesive team in years.” The Devildogs return nine players and have five seniors who will be counted on for leadership this season. Gone are leading scorers Miniya Reese and Gracen Ledford, but TR returns a slew of players with Varsity experience. PG Meredith Shipman is the top returning scorer and runs the show for the Devildogs. Vonshayla Webb and Sadie McKinney give TR a solid post presence and are the top returning rebounders (behind Reese) from last years 15-10 team. Carly Reynolds, Taylor Reynolds and Madison Bruce will be key contributors this season. Travelers Rest opens their season on November 28th at home vs Greer Middle College.

New head coach Alex Smith enters with a young, but experienced group. Top returning scorers Abby King and Klayton Mathis are only sophomores. Juniors Jai’lah Williams and Baylie King are the top returning rebounders from a year ago. MB Garabedian joins this starting group. With a young core, the Tigers focus will be bringing great effort and attitude and focusing on aspects of the game they can control. The Tigers open their season November 28th on the road at Riverside.

Last season the Wildcats went 19-9 and 3rd year head coach Latrese Davis hopes to build off of that success as they return every player from a team that advanced to the 3rd round of the playoffs. Top scorers LaImani Simmons and JaRae Smith are only sophomores and junior Azriela Folkes is the top returning rebounder. Last year the Wildcats had success with four freshmen and four sophomore playing prominent roles. Juniors Xan Rowland and LaChara Logan add depth and leadership to this team. Woodmont is still a young team, but they are a threat to contend this year.   Woodmont opens at home vs BHP on November 28th.

Head coach Lamont Wakefield comes over from Southside to inherit a team that did not win a game in 2016-17. The Patriots were a young squad which featured eight freshmen or sophomores playing significant minutes. Nakya Jones and Emily Culbreath enter their sophomore year with a lot of experience and will be called upon for leadership early in their careers. Annie Zemp and Daja Davis join the Varsity and will be asked to contribute right away. Coach Wakefield wants his girls to “trust in one another and the system” and to “compete in all four quarters.” JL Mann opens their season November 28th at Southside.

The Tigers finished 2nd in Region II-AAA and made it to the 2nd round of the playoffs before falling to Farifield Central. The Tigers lose only two seniors from that team, but both Brittany Dawson and Brianna Lewis gave the Tigers a strong post presence. The Tigers will rely heavily on an experienced backcourt as they look to build off of last season success under a new head coach and a new system. Southside opens their season at home vs former head coach Lamont Wakefield and JL Mann on November 28th.

The Bulldogs grabbed the 4-seed out of Region II-AAA last season and Coach Matt Lindsey hopes to build on that experience in 17-18 with the “closest together group I’ve had” in his 5 seasons as head coach. Leading scorer Sakorea Black has graduated, as have Farris Roach and Caitlin Culbertson. Jashiya Henderson, 2nd last season, will be asked to shoulder more of the scoring load as will Terany Davis and Sara Edwards down in the post, the top two rebounders from a year ago. Tytiana Davis and Jada Robinson look to make the most of their expanded roles this season. Berea has a mix of senior leadership and sophomore talent and hopes to blend that youth and experience as they look to contend for a region title. Berea opens on the road November 28th at Eastside.

Head coach Jekesha Herring has a young team which struggled in 2016-17. The Trojans lose only two seniors and hope their returning group gained enough experience to be more competitive in 2017-18. Seniors Chazales Miles, Adahi Alarcon, Lashun White and Tiquasha Hagood will be counted on to provide leadership this season. Carolina opens their season at Westside on November 27th.