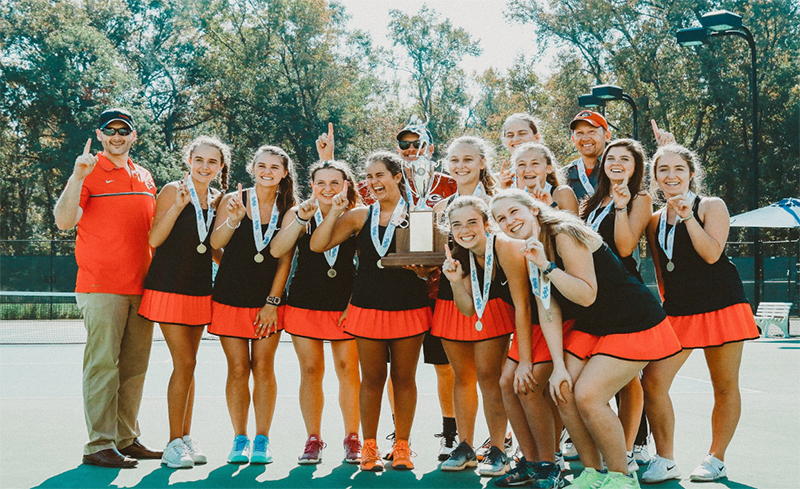 The Greenville Red Raiders Girls Tennis Team entered 2017 as defending Class AAAA State Champions, but also as a very young team.  Greenville features only one senior in their top 5 and 8th graders Julia Price and Wylie Jopling compete as the teams No. 1 and No. 5 respectively.  To defend their 2016 title, the Red Raiders were going to need success from their young players.

They got it.  The Red Raiders swept through Region I-AAAA and grabbed a #1 seed in the Class AAAA playoffs where they dispatched with Greer, Aiken and Travelers Rest in the first three rounds by a score of 19-0.  In the Upper State Finals, Greenville beat region rival Daniel 5-1 to advance to the State Finals to face AC Flora.  In the finals, Emma McFall, Gracie Walls and Jopling secured wins in the No. 3, 4, 5 matches, but Flora won the No 1 and 2 matches, defeating Price and Layton Powell.  That left doubles play to decide the match.  Senior Kate Keller and sophomore Sophie Young dropped the first set in No. 2 doubles 6-7, but stormed back to take the second set 6-3 and third set 10-7, securing the title for Greenville.

The Red Raiders are now back-to-back Class AAAA State Champions and still a relatively young team for third year head coach Mike McCuen. Seniors Kate Keller and Gracie Walls were key to the Raiders repeat, both securing points in the 4-2 victory.  Price, Powell, Jopling, McFall, Young all return, giving the Raiders a very deep and young core as they continue to build a dynasty at Greenville.