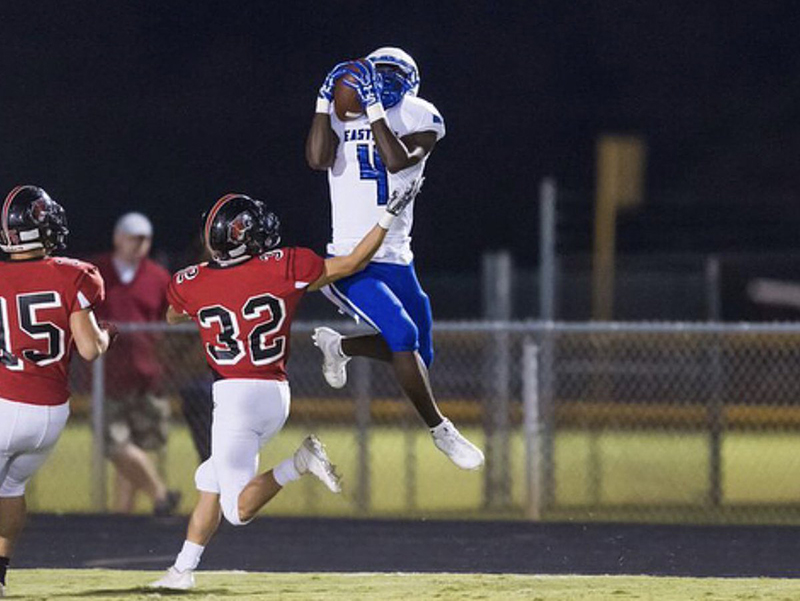 Welcome to November and the start of the SCHSL High School Football Playoffs!  Seven Greenville County Schools teams qualified for the postseason, with  four of the seven hosting 1st round matchups.  At Sirrine Stadium, Blue Ridge (3-7) will travel into downtown to face Greenville (9-1).  The Red Raiders earned the #1 seed out of Region I-AAAA with a week 10 victory over BHP.  QB Davis Beville has been terrific for the Red Raiders all season, and last Friday he put up 415 yards and 4 touchdowns threw the air to propel Greenville to the region championship.  Ty Hellams hauled in 11 of those Beville throws for 255 yards and Mack Braswell grabbed 13 balls for 111 yards and the game winning score.  The Raiders also possess a ground attack with 1000 yard rusher Danyaus Williams-Byrd and Collin Wakefield who scored a key TD vs BHP.  The Tigers are coming off a tough loss to region champion Greer in which starting QB Jake Smith was transported to the hospital.  The loss of Smith puts more of the offensive load on Senior RB Tyree Cofield.  Backup QB Hunter Byars has seen playing time this season and Blue Ridge is looking for him to step right in and lead the Tiger offense.

Greer (9-1) went into the week 10 matchup with Blue Ridge having clinched the region championship and #1 seed out of Region II-AAAA the prior week.  Rather than take it easy for a week, the Yellow Jackets went on for a 68-3 victory.  Greer will host Daniel (2-8) in a rematch of a week 3 game in which the Jackets won 42-23.  Greer is led on offense by a trio of big play threats.  QB Trey Houston is an explosive runner and accurate passer who ranks highly in the county in both categories.  Houston trails only RB Dre Williams in yards rushing on the Jackets this year.  WR/RB Quavian White is a Shrine Bowl selection and threat on offense, defense and special teams for Greer.  On defense the Jackets have yielded only 125 points on the season.

Also out of Region II-AAAA comes 2nd seed Eastside (9-1).  The Eagles only loss on the season was to region champion Greer.  Eastside enters with one of the most dynamic aerial attacks in the state.  QB Jordan Morgan, a North-South All-Star selection, drives the Eagles offense and led the county in passing yards and TDs.  Morgan has a stable of weapons, including Chance Pride, Payton Mangrum, Daniel Baldwin and Haven Berry, all seniors and all a threat to score on any play.  Reggie Rodgers is the primary ballcarrier for the Eagles.  Eastside's defense has also been exceptional this year, allowing over 10 points only four times, while pitching four shutouts during the regular season.  Eastside hosts Wren (6-4), a team they became acquainted with week 10 as the two met in the regular season finale.  All the Eagles did was put up 610 yards of offense in a 70-7 win.  The Golden Hurricanes will be looking for revenge from week 10's embarrassment at Eastside this Friday, but if the Eagles offense is sharp it may not matter.

In Region II-AAAAA, Hillcrest faced rival Mauldin with the region title and #1 seed on the line.  While the Rams offense had been stellar in region play, it was the Hillcrest defense that did the dirty work Friday night.  The Rams held the Mavericks under 120 yards of total offense in defensive struggle won by Hillcrest 14-0.  The Rams (8-2) will host Fort Mill (4-6) out of Region IV-AAAAA.  QB Will Watts and his talented group of receivers including Quen Jefferson, Steven Campbell and Jeremiah Talbert look to get back on track this week vs the Yellow Jackets.

Mauldin's loss at Hillcrest knocked them down to the #3 seed out of Region II-AAAAA.  The Mavericks (6-4) will travel to Rock Hill to face the Bearcats (4-6) out of Region II-AAAAA.  Mauldin's defense has been strong all season and the Mavericks will rely heavily on that unit to slow down the spread attack of Rock Hill.  Mauldin has been inconsistent on offense this year and coming off their worst showing of the year, Mauldin hopes to right the ship and get a strong ground game fired up behind North-South All-Star Center Jackson Nash.

Woodmont (2-8) is coming off a week 10 bye, where they had to sit back and wait on the results of Easley vs JL Mann to determine their seed in Region I-AAAAA.  The Wildcats drew the 4th seed and will take their option based ground attack to Dorman (8-2) to face the Region III-AAAAA champion Cavaliers.  Senior QB Cole Fendley steers the ship for the Wildcats offense and has a big play waiting to happen threat in RB Keyshun Kilgore.  Woodmont will rely on their ground game to try and control the clock as they look to spring the upset on the mighty Cavaliers.

In Class AAA, Southside returns to the playoffs after missing them in 2016.  The Tigers improved from two wins last year, to tally five wins and grab the #4 seed out of Region II-AAA.  QB Jalon Calhoun will lead an improved Tigers team down to Fairfield-Central to face the 7-3 Griffens, the #1 seed out of Region IV-AAA.

All kickoffs are at 7:30 on Friday as teams look to survive and advance!