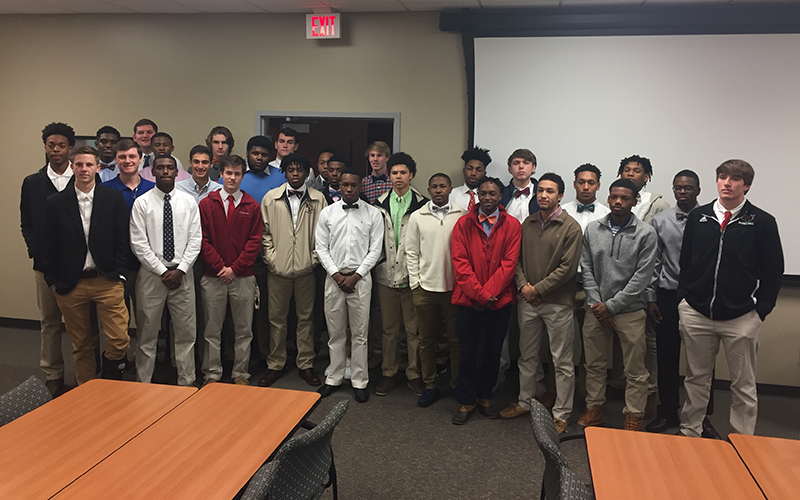 The 2017-18 high school basketball season is upon us. No better place to start a season preview than at the top and at the top of Class AAA last year were the Southside Tigers:

The defending AAA State Champions compiled an impressive 27-1 record in 2016-17. Nine players return from that championship squad, including PG Tuzion Brock, wing Jayden Shell and post players RJ Campbell, Jamal Burke and Taymon Leamon. Campbell, a 6’8” junior, returns as the teams leading rebounder averaging 12 boards a game. Campbell, along with seniors Taymon Leamon (6’4”) and Jamal Burke (6’10”) give the Tigers a long and athletic post presence. Southside will need to replace 21 points per game from leading scorer Jalen McKelvey, the lone graduate off last years championship team. Tobias Canada looks to be the man to slide into the starting lineup to replace McKelvey in 17-18. Campbell and Brock will shoulder more of the scoring responsibilities this season as well. The Tigers are deep and athletic with Jalon Calhoun, Tamir Dogan-Hamilton, Nehemiah Jackson and Leamon coming off the bench. Head coach Steve Beasley, entering his 7th season with Southside and 38th overall, believes his team can play big or small with the depth they have. Defense was the key to their 16-17 title run and will be this year as the Tigers look to again be contenders in Class AAA. Southside opens their season on November 28th vs JL Mann.

In the very difficult Region II-AAA, Berea again looks to be a major hurdle for the Tigers. Coach Jeff Maness, 8th year, returns most of the players from a 21-6 team that made the 3rd round of the playoffs last year. Senior C Jaylan Gordon will be a focal point of the offense this year. Gordon and G Newa Hashim are the top return scorers for the Bulldogs. Both will be counted on to take on a bigger role with the loss of Jalen Duffin and Raymond Williams. Senior PG Ta’mious Young will run the show, as he and Hashim will be counted on to provide leadership on the court. Seniors Damarcus Leamon and Daiquane Weir-Coleman provide versatility and athleticism on the wings. Leamon was the teams second leading rebounder last season behind Gordon. With a senior laden squad, the Bulldogs again figure to be contenders in Class AAA. Berea opens their season at Eastside on November 28th.

Carolina grabbed the 4-seed out of Region II-AAA last year. The Trojans hope their up-tempo style allows them to challenge Berea and Southside at the top of the region this season. Head coach Thomas Fair enters his 21st season patrolling the Carolina sidelines. He hopes returning contributors Davario Brown, Keshawn Ward and Seriss Holmes can make up for the loss of seniors Nathaniel Wilson, Kendrick Bland and Joseph Hooker. Brown, Ward and Holmes will be tasked with controlling the Trojans up-tempo attack as the team relies on defense to create turnovers to set up their offense with easy opportunities. Carolina opens on the road vs 5A Westside on November 27th.

The Generals are coming off a 23-3 season under 3rd year head coach Reggie Choplin, but an early exit from last years playoffs has this team hungry for more. First task for the Generals is replacing team leaders Luke Brenegan and Noah Fowler, wings who created big shots and controlled the tempo for Wade Hampton last season. Senior C Will Edwards returns as the teams leading rebounder and scorer and he may play an even bigger role in 17-18 with the graduation of Brenegan and Fowler. Seniors D’Cameron Range and Caleb Henry will need to take on bigger scoring roles in 17-18. Range has been the Generals Swiss-army knife the last two seasons, an undersized forward who can guard multiple positions and was second on the team in rebounds. Malcolm Chavous gained experience last year and figures to have a bigger role at PG this winter. The top candidate to replace Luke Brenegan may be his younger brother Nick Brenegan. Nick dressed Varsity last season, gaining experience heading into 17-18. Ethan Girardeau also figures to see more time in 17-18. Coach Choplin wants the team to develop chemistry and knows younger players will need to step up as the team tries to improve its depth this season. Wade Hampton opens their season on December 1st at home vs Eastside.

Under 1st year head coach Murray Long the Warriors finished 3rd in Region II-AAAAA, but come playoff time the team really gelled and advanced to the 3rd round before falling to eventual state champion Dorman. Riverside will have to replace leading scorer Kris White. Collin Fowler was second in scoring to White and the teams leading rebounder in 16-17. He will have a bigger role for the Warriors this season, along with Landon Shaw and Carl Kahaleh. Coach Long wants this teams shot selection to improve this year and as always, team defense will be key. Riverside opens their season at home vs Blue Ridge on November 28th.

Jaquan Holmes was the Rams leading scorer and rebounder in 2016-17. Holmes, along with fellow graduates Markus Shannon, Lavassit Madden, Johnkel Lewis, Tay Mangle, Jaiquan Lewis and Rakevious Thompson will all need to be replaced. Hillcrest returns a relatively young team with sophomores Justin Amadi and Marquez Lewis expected to take on much bigger roles in 17-18. Senior Steven Campbell returns and will expected to provide leadership for this young team. Junior G Cameron Hunter will take on more ball handling responsibility. Head coach Matt Ramsdell, 3rd season at the helm, wants his young squad to develop chemistry and play unselfishly this season. The Rams open their season vs Spartanburg on December 1st.

Second year head coach Adam McClain is hoping to break through and return to the playoffs in 17-18. Mauldin returns size in the post with 6’7” Branson Taylor and 6’6” Eric Washington, both juniors and the duo finished 1-2 in team rebounding last year. Junior PG AJ Jackson also returns as the teams leading scorer. Jackson will be the primary ball handler and will be counted on to be a team leader this season. The Mavs will have to replace the outside shooting of Grayson Reames and Keshaun Myers. Senior Tra McKinney will take on more of a role on the wing in place of Myers and Reames. Mauldin is still a young team, but their core of juniors has gained Varsity experience over the past two seasons. Mauldin jumps right into the fire in 17-18, opening at defending state champion Dorman on December 1st.

Last year Eastside went 19-9 and fell in the Upper State Finals to Wren. Head coach Tom Chamness has his work cut out for him in his 16th year with the team as the Eagles graduated 10 players off the semi-finalist team. Gone are leading rebounders DeShundre Rucker and Rico Williams, along with PG’s Trey Goldsmith and Darius Foster. What the Eagles do get back is leading scorer Pantry McKinney. Brian Clayton, Latrell Dupree and Malachi Mickel also return and Dorian Miles joins the Varsity squad this season and will be counted on as a contributor. It may take some time for the all the new players to gel, but Eastside still figures to be a contender come region play. Eastside opens their season at home vs Berea on November 28th.

Last year the Devildogs finished 2nd in region, but were knocked out by South Aiken in the 1st round of the playoffs. The Devildogs lost three seniors, Jacob McMorris, James Burnside and Bo McKinney, off that 16-10 team. TR returns a nice blend of youth and experience in 2017-18. The team has five seniors, five juniors and four sophomores. From the sophomore group, Sam Brown, Case Roach and Derrick Fields all saw time on Varsity last season. The Devildogs open their season at home vs Greer Middle College on November 28th.

Greer loses only two seniors from a young squad that grabbed the 3rd seed in Region II-AAAA a year ago. The Yellow Jackets return 10 seniors this winter, including leading rebounders Ryan Pearson and Chris Davis. Sam Gravley and junior Magic Moody return on the perimeter as the teams leading scorers along with G Kyle Moore who is expected to have a bigger role this season. Head coach Greg Miller enters his 3rd season at the helm and believes that his teams ability to defend will be their key to success in 17-18. Greer will open their season at home vs defending 5A state champion Dorman on November 28th.

2016-17 was a rebuilding year for the Tigers under new head coach Richie Stevens. The Tigers lose three key seniors from that team, Jason Sammons (2nd in scoring), Sonny Stevens (2nd in rebounding) and Stephen Sammons. Blue Ridge returns leading scorer Shawn Stokes who averaged 11.7 points per game. They also return Josh Brower in the post, their top rebounder from last year. Seniors Tommy Vaughn and Tyree Cofield will be expected to take on bigger roles in 17-18 as will newcomer Josh Ray. Coach Stevens wants to see strong team rebounding on both ends of the floor this year if the Tigers are going to continue to grow and improve. Blue Ridge opens their season November 28th at Riverside.

The Red Raiders went 20-5 last season and grabbed the 2-seed out of Region I-AAAA, but finished with a disappointing home playoff loss to South Pointe. Greenville returns a strong core off that team, including a trio of guards in Dorian Williams, Quade Parks and Wells Hoag. Junior Jimmy Fritzsche (6’6”) moves up to provide the Raiders with a solid post presence and freshman JQ Jones will see time on Varsity after leading Sevier to the county middle school title last season. Head coach Mike Anderson believes this is his most talented team in his 6 years at the helm. Greenville opens their season at home on November 28th vs Christ Church.

With a young team that only had two seniors, Woodmont clawed its way into the playoffs as a 4-seed. Head coach Tim Morris enters his 20th season and hopes the experience gained last year propels the Wildcats to bigger and better things in 17-18. Senior Reggie Young returns as the teams leading scorer and rebounder from last season. Fellow seniors Keyshun Kilgore and Marshall Garrett also return and will be counted on for leadership this year. Woodmont’s biggest obstacle may be staying healthy all year. The Wildcats have already had three players go down to knee injuries in the offseason. Getting everyone healthy and back will be the biggest key to a successful season. Woodmont opens its season at home vs BHP on November 28th.

It was a disappointing 5 win season for the Patriots in 16-17. Enter new head coach Michael Morrison who wants his Patriots to play with relentless effort on both ends of the floor. Sophomore Quinton Fowler returns as the teams leading scorer. Junior Cooper Fowler was second in scoring and led the Patriots in rebounds and figures to have an even bigger role in the post this season along with Shomari Miller, 2nd on the team in rebounds last year. Kam’ron Cunningham will be counted on for senior leadership and Blake Harris joins the Varsity and figures to be a contributor in 17-18. JL Mann opens their season at defending AAA state champion Southside.