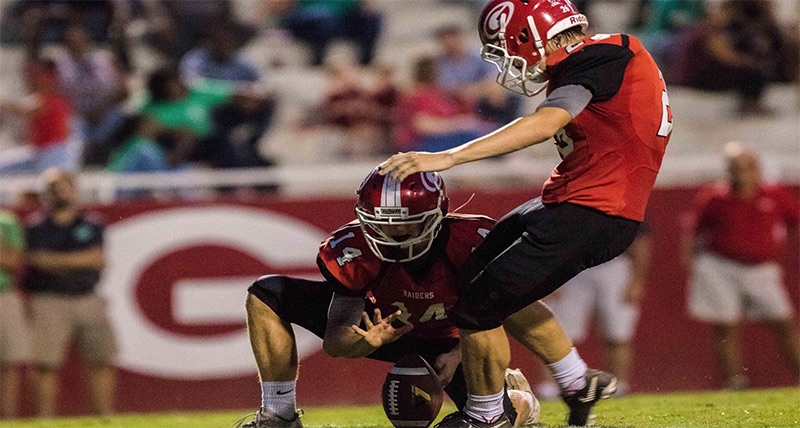 In large part, week 9 separated the playoff contenders from the pretenders.  With one week to go, teams are still jockeying for playoff seeding.  One school not fighting for a higher seed is the Greer Yellow Jackets.  With a 63-20 win over Union County, the Yellow Jackets locked up the #1 seed out of Region II-AAAA.  Greer (8-1,3-0) opened the game with a 90-yard drive that culminated in a touchdown when Trey Houston found Qua White on a 6-yard TD toss.  Houston then found Dre Williams on a wheel route out of the backfield for a 14-0 lead.  Greer closed the half with a 21-0 lead as Houston added a 10-yard rushing score.  The Greer defense opened the 2nd half with a score as Matthew Mason scooped up a fumble and delivered a touchdown.  Houston added two more TD strikes, a 46-yarder to White and a 4-yard strike to Nate Jefferson.  Zech Evans and Matthew Huff added late TD runs as the Yellow Jackets cruised to the victory and a region title.  Greer closes the regular season on the road at Blue Ridge (3-6,1-2).

The Tigers ran into a buzzsaw named Jordan Morgan on Friday night.  Morgan orchestrated the Eastside aerial attack to the tune of 542 yards and 7 touchdown passes.  Blue Ridge (3-6,1-2) kept it close early after they tied the game at 14 on a Jake Smith TD toss.  From that point forward the Eagles offense dominated.  Chance Pride grabbed 10 receptions for 173 yards and 2 scores from Morgan and added a 90-yard kickoff return for another score.  Daniel Baldwin had 9 catches for 126 yards and 3 touchdowns.  Payton Mangum added 130 yards and a score.  Haven Berry grabbed an 80-yard bomb from Morgan.  In addition to the 7 passing TDs, Morgan added a rushing TD as well as the Eagles (8-1,3-1) locked up the #2 seed in Region II-AAAA.  Eastside hosts Wren out of Region 1-AAAA in their regular season finale.  The Eagles and Hurricanes are also locked into a rematch the following week in the 1st round of the Class AAAA playoffs.  Blue Ridge currently holds the #4 seed heading into week 10.

Greenville has put itself in a position to win Region I-AAAA after a 51-14 win over the Daniel Lions.  The Red Raiders trailed early, but Davis Beville connected with Mack Braswell on back-to-back touchdowns to give Greenville a 14-7 lead.  A Jack Henegan FG pushed the lead to 10.  Beville used his legs to race 50-yards for a score and RB Danyaus Williams-Byrd eclipsed the 1000 yard mark for the season, adding a 7-yard TD run.  Colin Wakefield and Abijah Shaw each added a rushing score and Ty Hellams hauled in a 50-yard bomb.  Greenville (8-1,3-0) closes the season at BHP.  The winner nabs a region title and #1 seed in the AAAA playoffs.

Rivals Hillcrest and Mauldin will also find themselves in a winner take all matchup this coming Friday.  The Rams (7-2,4-0) control their own destiny in Region II-AAAAA after they demolished Wade Hampton 54-7.  QB Will Watts went 17-19 for 296 yards and 3 scores and RB Donte Anthony added three touchdowns on the ground as Hillcrest rolled on the road and knocked the Generals out of playoff consideration. The Rams offense has found its groove in region play and looks to keep rolling at home vs Golden Strip rival Mauldin.  The Mavs defense has played well all season, including forcing seven turnovers the first time these two teams met in week 1.  Mauldin's defense delivered the Mavs a chance as they held Laurens under 100 yards rushing en route to a 17-15 victory.  QB Mitchell Norman added two more rushing TDs to his season total.  The Mavs (6-3,3-1) will need a great effort from Mitchell and their defense as they look to upset the Rams.  A Mauldin win creates a 3-way tie atop the region with Greenwood and currently Mauldin holds a tie-breaker advantage in points against.

Woodmont wrapped up its 2017 regular season a week early as the Wildcats have a Week 10 bye.  Woodmont held a 14-13 lead at the half, but their offense stalled in the 2nd half as Easley went on for a 28-14 victory.  Woodmont (2-8,1-3) currently hold the 4th and final spot out of Region I-AAAAA.  The Wildcats will have to wait the outcome of Easley vs JL Mann to see if their spot holds.

JL Mann (2-7, 0-3) fell to region co-leader TL Hanna 41-0 on Friday night.  Mann needs a win on the road at Easley and then see how the tie-breaker works out for a shot at the playoffs this year.

Unlike the Patriots, Southside (4-5,1-3) controls its own destiny.  Beat rival Carolina and the Tigers are back in the playoffs.  After a 42-12 loss at region leader Emerald, Southside finds itself clinging to the #4-seed in Region II-AAA.  Carolina, winless on the season, can make things interesting if they can defeat Southside and create a three-way tie for the fourth and final playoff spot.  The Trojans fell to Palmetto 51-0.

Berea (2-7, 1-3) will be pulling for the Carolina upset as the Bulldogs currently lose a tie-breaker to Southside for that fourth spot.  Berea can help its cause if it can find a way to upset Emerald on Senior Night.  The Bulldogs gave reigning region champs Powdersville a battle into the 2nd half before the Patriots pulled away.

Riverside (1-8,0-4) will close its regular season at home vs Wade Hampton.  Both the Generals and Warriors have been eliminated from the playoffs.  The Warriors battled Greenwood last Thursday night, pulling within a field goal at 17-14 after a Logan DiBenedetto TD toss and an 83-yard score by Max Louris, but Greenwood pulled away late in the half.  Wade Hampton will be looking for revenge as Riverside upset them to close out the 2016 campaign.