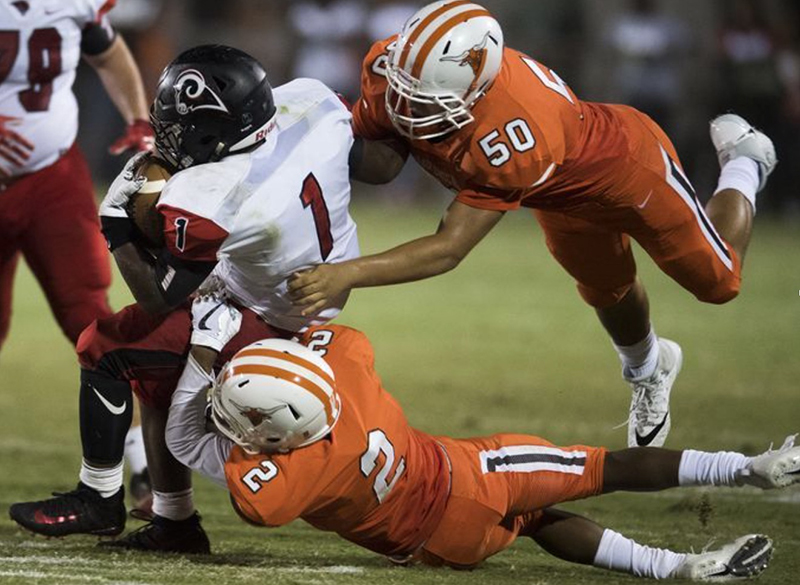 With Week 8 in the books, teams have two weeks left to jockey for playoff positioning.  With that, the biggest game in county was a non-region tilt featuring undefeated Greenville (7-0,2-0) at one loss Greer (6-1,2-0).  Both teams control their own destiny in their respective regions and this matchup could be a playoff preview featuring two potential number one seeds.  QB Trey Houston got the Yellow Jackets on the board first with a 27 yard scramble.  Greenville answered with a 35-yard Jack Henegan FG and after one, Greer held a 7-3 lead.  Houston hit Qua White for a 25-yard TD and the Yellow Jackets defense kept Greenville off the board to give Greer a 14-3 halftime lead.  Chris Quinn hauled in another TD from Houston early in the 3rd as Greer pushed their lead to 18.  The Yellow Jackets gambled late in the 3rd on 4th-and-1 from the 49 yard line.  Houston rewarded the decision by ripping off a 49 yard TD to extend the Jackets lead to 27-3.  A 10-yard run by Danyaus Williams-Byrd finally got the Red Raiders in the end-zone and after three, Greenville trailed 10-27.  Williams-Byrd added another TD in the 4th and another Henegan FG cut the lead to 19-27, but Greer recovered the ensuing onside kick and Greer was able to run out the clock and secure the victory.  QB Trey Houston passed for 139 yards and two TDs and rushed for 139 and two scores. Greer (7-1,2-0) hosts rival Union County (1-7,1-1) next Friday.  Greenville (7-1,2-0) hosts Daniel in a big Region 1-AAAA matchup.

Down in Greenwood, Hillcrest and the Eagles battled to the final seconds in a big Region II-AAAAA game.  The Rams fell behind 14-0 early as Greenwood got a pair of TDs from QB Dre Yarbough in the 1st quarter.  The Rams cut the lead in half early in the 2nd when Will Watts hit Jeremiah Talbert on a 15-yard TD. Greenwood answered with another Yarbough score, but Rams battled back as Watts found Steven Campbell on a jump ball in the back of the end-zone.   Hillcrest cut the lead to 21-19 at the half after Watts hit Talbert in the flat and the speedster made a man miss and raced 33-yards for a score.  Hillcrest grabbed their first lead in the 3rd after Watts tossed his fourth TD on the day, finding Trey Adkins on a 4th-and-7 pass which Adkins turned into a 40-yard TD.  The Eagles retook the lead, 27-26, on a Von Ramsey TD run.  Watts fifth TD of the day was a deep bomb to Campbell for a 72-yard score, but before the end of the quarter Greenwood again answered on an 8-yard toss from Yarbough to Sam Pinckney.  After a wild 3rd quarter, the score was 34-33 Greenwood.  Yarbough opened the 4th with his third rushing TD of the day.  An Eagle FG pushed the lead to 44-33 with 5 minutes remaining.  With 2:48 remaining Watts tossed his sixth TD, a 6-yarder to Talbert and Watts to Quen Jefferson for 2-pt try made it a FG game at 41-44.  Hillcrest’s onside attempt was recovered by the Eagles, but the Rams defense forced a 3-and-out.  Hillcrest had 54.1 seconds to march 82 yards.  The Rams marched down to the 29 and on a trick play flea-flicker Watts found Campbell for the game winner with 3.3 seconds remaining.  Hillcrest moved to 6-2 on the season and more importantly, 3-0 in region play with the 48-44 win.  Watts put up 405 yards passing and 7….SEVEN TDs!  Hillcrest travels to Wade Hampton (2-6,0-3) next Thursday.

After falling just short a week ago vs Laurens, Wade Hampton really needed a win at home vs Mauldin to keep their playoff hopes alive.  It was Spirit Week at Wade Hampton and the Generals raised over $250,000 dollars for the Shriners Hospital!  Spirit was high to say the least as Mauldin came to town.  The 1st half was a wild ride as the game opened with an onside kick by Mauldin which they recovered.  The Generals defense was able to hold, but the ensuing punt pushed Wade Hampton inside the 5-yard line.  Two plays later Mauldin had a 2-0 lead as Trey Berry was tackled in the end-zone by a host of Mavericks.  Mauldin went 3-and-out on the next possession and the Generals blocked the Mavs punt setting up 1st and goal at the 1-yard line which Rashad Luckey turned into a 7-2 lead.  Early in the 2nd, Raekwon Fenderson raced around the edge for 14 yards and a 9-7 Mauldin lead.  Wade Hampton special teams played special, as JJ Richardson took the kick-off 85-yards for a TD.  After Mark Milnac sniffed out and picked off a Wade Hampton screen, Mitchell Norman gave the Mavericks a 16-14 halftime lead with a 1-yard run.  The Generals forced and recovered a fumble to open the 3rd quarter, setting up Sebastian Garcia for a go ahead 42-yard FG.  The Generals pushed their lead to 8 on a Tim Holmes TD reception.  Jalen Anderson picked off an errant Generals pass to open the 4th, setting up another short Norman TD run.  Holding on to a 24-22 lead, Wade Hampton recovered the Mauldin onside attempt, but the offense was forced to punt giving the Mavericks another shot.  Mauldin took advantage with a short TD run by Cris Paez.  After the 2=point conversion Mauldin pushed their lead to 30-24.  Thomas Tillotson and the Maverick defense forced another turnover, but Mauldin was stuffed on 4th and goal from the one leaving Wade Hampton with one last chance.  The Generals got out of the shadow of their end-zone, but on 4th down, Hagan Hiott’s pass missed its mark and Mauldin held on for the 30-24 victory.  Mauldin’s defense covered up poor special teams play as they held the Generals to negative-1 yard rushing.  Mauldin (6-2,2-1) will host Laurens next Thursday.  The Generals will need to pull a huge upset as they host region leader Hillcrest.

Eastside’s high powered aerial attack stumbled a bit last week as they managed only 7 points in dropping their first game of the season to Greer.  The Eagles were looking to get back on track as they hosted Travelers Rest in a Region II-AAAA matchup.  It didn’t take long for the Eagles to return to form as they steamrolled the Devildogs 63-14.  QB Jordan Morgan opened with a pair of TDs to Chance Pride, including a 76-yard catch and run.  Morgan added a rushing TD as Eastside raced out to an early 28-0 lead.  Derrick Fields did toss a 64-yard TD to cut the lead to 28-8, but that would be as close as TR would get.  Travelers Rest (1-7,0-3) plays out of region as they host Pickens next Friday.  The Eagles hold out hopes for a high seed in the AAAA playoffs as they travel to Blue Ridge (3-5,1-1).

Blue Ridge traveled to a surprisingly winless Union County in a Region II-AAAA tilt.  Unfortunately for the Tigers, Union got a little bit of its grove back as they raced out to an early 14-0 lead.  Tyree Cofield hauled in a 61 yard TD pass to cut the lead in half, but Union countered with 21 unanswered points.  The teams traded late 1st half scores and the Yellow Jackets took a 41-14 lead to half.  Cofield added a late TD run, but injuries decimated the Tigers as they fell 20-54.

In Region II-AAA action, Southside hosted defending region champion Powdersville.  Defense ruled the 1st half as both offenses drove deep into opponents’ territory and both defenses held.  Powdersville finally broke through late in the 2nd quarter to take a 7-0 lead into the half.  The Patriots extended the lead to 14 after three quarters.  The Tigers offense finally broke through with an 85-yard scoring drive to cut the lead in half.  The Southside defense forced a turnover and the Tigers scored again, but a blocked PAT left them trailing 14-13 in the 4th.  Southside forced a 3-and-out, but fumbled the ensuing punt and the Patriots went on for the 21-13 win.  Southside (4-4, 1-2) travels to Emerald next Friday.

Emerald wasted little time in defeating an undermanned Carolina team.  The Trojans fell behind 51-0 at the half and lost 63-7.  Carolina (0-8,0-3) hosts Palmetto next Friday.

The Mustangs remained unbeaten in region play with a 42-0 win over Berea.  Palmetto’s defense was outstanding, shutting down a dangerous Bulldog rush attack.  Berea (2-6, 1-2) travels to Powdersville next week.

Riverside struggled on the road at Laurens as they fell behind 21-0 at the half and dropped to 0-3 in region play after a 27-0 loss.  Laurens dominated the game on the ground and controlled the clock, keeping Riverside out of sync on offense.  Riverside (1-7,0-3) hosts Greenwood next Thursday night.

In Region I-AAAAA, Woodmont faced undefeated TL Hanna.  The Wildcats took their opening possession and marched down the field for a 7-0 lead.  Woodmont forced a punt and their option attack ground down clock in the 1st quarter, but a Woodmont fumble set up Hanna for a game-tying score, making it 7-7 after one.  In the 2nd, Hanna dominated the ball and put up 22 points for a 29-7 halftime lead.  The Wildcats never really threatened in the 2nd half as they fell 50-7.  Woodmont (2-7,1-3) closes their regular season at home next Friday vs Easley.

JL Mann faced Westside on Thursday night.  The Patriots kept it close early, before falling 34-0 to the Rams.  Mann (1-7,0-2) will host unbeaten TL Hanna next Friday.