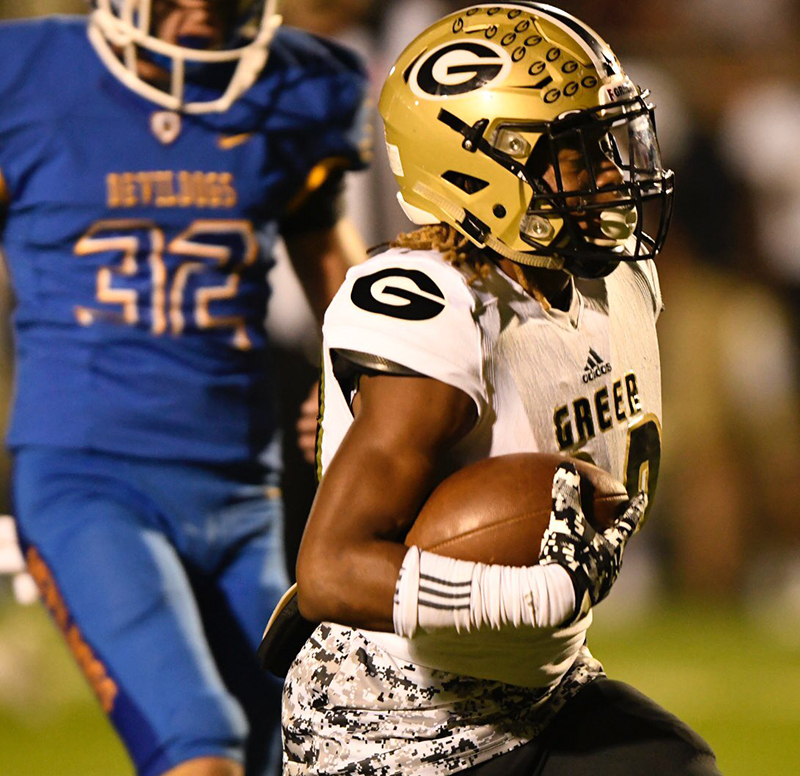 Week 7 featured some major match-ups as teams jockey for playoff seeding within their regions.  Dooley Field in Greer hosted a huge match-up between two Top 10 teams in Class AAAA.  Unbeaten Eastside brought their high powered offense to a one loss Greer.  The Eagles took the opening possession and were forced to punt, where they pinned the Yellow Jackets back at the 3-yard line.  Pinned back, Greer turned to RB Dre Williams.  Williams got the edge on carry number two and raced 87 yards to put Greer on the board.  Eastside answered as QB Jordan Morgan connected with Chance Pride for 55 yards, setting up a 3-yard run by Morgan to tie it at 7.  The teams exchanged punts on the next few possessions and the 1st quarter ended with the score tied 7-7.  CB Richie Sadler gave the Yellow Jackets some momentum early in the 2nd quarter when he picked off Morgan on a deep pass.  The turnover set up another big Williams run, this time 48 yards to put Greer up 14-7.  The Eagles pushed across the 50, but the Greer defense held on 4th down and gave it back to their offense.  QB Trey Houston wasted little time going up top to Braxton Collins for a 43-yard TD and 21-7 lead.  Again the Yellow Jacket defense gave Eastside fits, forcing them into a 3rd and 58!  On the ensuing punt, Qua White raced 52 yards setting up Houston for an 8-yard TD run.  At the half Greer held a 28-7 lead.  After another Morgan interception, Dre Williams scored his third TD of the night.  Williams finished his night with 14 carries for 277 yards and 3 TDs.  Qua White added one last score with a 25 yard run and the Yellow Jackets seized control of Region II-AAAA with the 42-7 victory.  Eastside (6-1,1-1) will host Travelers Rest (1-6,0-2) next Friday.  Greer (6-1,2-0) will host undefeated Greenville in a non-region meeting next Friday.

The Red Raiders (7-0) made their own big statement in Region 1-AAAA with a 46-14 over Wren.  Greenville outgained Wren 143-11 in the 1st quarter and RB Danyaus Williams-Byrd scored twice as the Red Raiders staked an early 14-0 lead.  Wren was without star QB Tyrell Jackson and Greenville took full advantage.  Williams-Byrd added his third TD to push the lead to 21-0 and Tydricus Hellams added a 53-yard punt return and a 2-pt conversion.  Jack Henegan's 35-yard FG as time expired left Wren trailing by 32.  Williams-Byrd added his 4th TD on a screen from Davis Beville and Collin Wakefield pushed the lead to 46 early in the 4th.  Williams-Byrd rushed for 149 yards and added 52 through the air as Greenville remains unbeaten heading into the big non-region match at Greer.

In Region II-AAAAA, Hillcrest's defense has been playing really well the last three weeks.  The Rams (5-2,2-0) defense was dominant again as Hillcrest shutout Riverside (1-6,0-2) 42-0 and held the Warriors to minus-18 yards rushing.  Donte Anthony put Hillcrest on the board early with a 13-yard run.  Will Watts hit Jeremiah Talbert for 50 yards to push it to 14.  The Rams welcomed back star receiver Quendarius Jefferson, returning from a leg injury, as Watts hit him for a 29 yard score and 21-0 lead after the 1st.  Watts hit two more TDs, one to Jefferson and again to Talbert for a 35-0 lead.  Steven Campbell caught an 11-yard strike from backup Ethan Beamish to make it 42-0 at the half and then Campbell went out and was named Homecoming King.  Will Watts went a perfect 10-10 for 203 yards and 4 TDs as the Rams will travel to Greenwood (5-1,2-0) in a huge region game next week.  Riverside will travel to Laurens.

Greenwood moved to 2-0 in region play with a 28-21 win at Mauldin (4-3,1-1).  The Mavs took a 7-0 lead late in the 1st on a 10-yard run by Cris Paez.   Greenwood tied the score early in the 2nd with a short TD run and followed that up with an interception to set up another short TD and a 14-7 halftime lead.  The Eagles opened the 3rd with a 43-yard TD run by QB Trey Yarbough.  Mauldin launched a 21 play drive, which included a fake punt and drove to the Eagles 1-yard line.  Unfortunately for the Mavs their 4th and goal lunge from the 1-yard line was stuffed and two plays later Yarbough raced 85 yards to extend the lead to 28-7.  Raekwon Fenderson cut into the lead with a 9-yard TD run early in the 4th.  After a defensive stop, Mitchell Norman hit Paez with a 75-yard bomb to make it a one score game.  The Mavs got one last chance, but Norman was picked on 4th and 5 with under a minute left to end the game.  Mistakes were costly as Mauldin had two interceptions, a lost fumble, a missed FG and a blocked FG.  Mauldin looks to regroup as they travel to Wade Hampton next Friday.

After a scoreless 1st quarter, Trey Berry exploded for a 72-yard TD to put Wade Hampton up 7-0 on the road at Laurens.  The Raiders countered with an 80-yard scoring drive to tie the game.  Rashad Luckey scored a short TD, but a missed PAT gave the Generals a 13-7 lead.  Laurens returned the ensuing kick-off to the 8-yard line, but the Generals defense held to preserve the lead temporarily.  On the next Raider drive, Laurens took a 14-13 lead with 1:07 left in the half.  Wade Hampton closed the half with a quick drive that set-up Sebastian Garcia who nailed a 52 yard FG and the Generals a 16-14 lead.  Turnovers doomed Wade Hampton (2-5,0-2) in the 2nd half as Laurens turned interceptions into scoring drives and a 32-16 win.

In Region I-AAAAA, JL Mann traveled to Woodmont for their region opener after being on a bye last week.  Woodmont fell short in their region opener vs Westside, taking a 13-9 lead into the 4th quarter before falling 30-13.  The Wildcats had no intention of falling short at home, racing out to a 21-3 halftime lead behind their strong run attack.  Woodmont pushed the lead to 35-3 after 3.  In the 4th, Woodmont was able to finish this week as they closed out the Patriots 49-17.  Mann (2-5,0-1) will host Westside next Friday.  Woodmont (2-6,1-1) will travel to undefeated TL Hanna.

Blue Ridge was also on a bye last week, so the Tigers opened their region slate on the road at Travelers Rest.  Blue Ridge jumped out to a 12-0 lead, which included a pick-6.  The Devildogs cut the lead in half on a Ben Dodd TD reception.  Derrick Fields gave TR the lead on a QB keeper, 13-12.  Blue Ridge answered with a short TD run by Tyree Cofield, but TR got another Dodd reception to grab a 20-18 lead with 2:28 left in the half.  Blue Ridge closed with a great 2-minute drill to regain the lead 26-20 at the half.  The teams traded punts for a scoreless 3rd quarter.  Cofield secured the win with a 68-yard scamper and a 32-20 Tigers victory.  Travelers Rest (1-6,0-2) travels to Eastside.  Blue Ridge (3-4,1-0) is on the road at Union County.

In Region II-AAA, Southside is off to a great start, already surpassing their 2016 win total.  On Friday night the Tigers ran into a stampede as they traveled to Palmetto.  The Mustangs raced out to a 35-7 halftime lead and went on for a 52-7 victory.  Southside (4-3,1-1) will host defending region champion Powdersville next week.