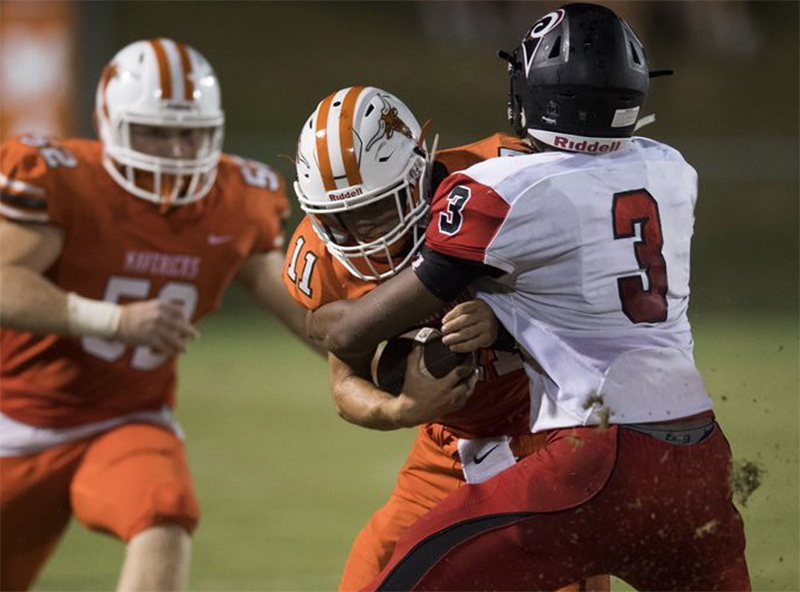 Week 10 is in the books and playoff berths and seeding is now finalized.  Friday night provided teams across the county to make a statement heading into the playoffs next week.  Down in Simpsonville, longtime rivals Mauldin and Hillcrest squared off with the Region II-AAAAA title on the line.  Hillcrest entered as region leader and QB Will Watts has been outstanding over the last few weeks.  Mauldin, 3-1 in region play, needed to pull the upset to jump to the #1 seed.  The Mavericks rely on their defense, which has been strong against the run all season.  Mauldin’s defense came to play, limiting the Rams to 58 yards rushing on 33 carries.  Problem for Mauldin, the Rams defense was even better on the night.  Hillcrest got after QB Mitchell Norman, forcing him to scramble around the pocket and take sacks all night.  Mauldin rushed for negative-1 yards on the night, in large part due to lost yardage on sacks.  Hillcrest got on the board on their first drive with a 15 play, 87 yard drive that ended with a Will Watts 12-yard TD toss.  It would be the only score of the half.  Mauldin’s Nick White returned the ensuing kickoff 70 yards to the Hillcrest 4-yard line, but a mishandled exchange by the Mavericks turned the ball back over to the Rams and Mauldin’s best scoring threat of the night was shutdown.  The teams exchanged punts to open the 2nd half and the Rams gained favorable field position after the exchange.  Hillcrest got the ball down to the 6-yard line following a couple Mauldin penalties, setting up Quen Jefferson for the TD run.  The Rams clinched the region championship and a #1 seed in the AAAAA playoffs with the 14-0 win.  Hillcrest will host Fort Mill next Friday night.  Mauldin settles into the 3-seed and will travel to Rock Hill to face the Bearcats.

Region I-AAAA was also up for grabs as Greenville traveled to Belton-Honea Path, where both teams entered with 3-0 region records.  The Red Raiders scored on the first play of the night as Tydricus Hellams took a screen pass from Davis Beville and raced 74-yards for the 7-0 lead.  Greenville went up 14-0 on a trick play that had 1000 yard rusher Danyaus Williams-Byrd tossing a TD to QB Davis Beville on a 3rd and 1 play.  Greenville’s defense held the Bears to only 14 yards in the quarter.  Late in the 2nd quarter Hellams extended the lead to 21 on a 50-yard slant from Beville.  BHP finally got on the board with 10 seconds left in the half and Greenville had a comfortable 21-7 lead.  Hellams had 163 yards receiving in the 1st half alone, outgaining the Bears by himself.  BHP woke up at the half and dominated the 3rd quarter, getting two TD strikes from QB Camden Bratcher and a Beville interception was returned 71 yards as the Bears clawed their way back for a 28-21 lead after three.  Greenville steadied the ship as Beville to Hellams again tied it at 28 early in the 4th.  The Bears drove to the Raider 1-yard line, but Greenville’s defense held, holding the Bears to a FG.  Following a 50-yard strike to Hellams, Collin Wakefield gave the Red Raiders the lead back on a 6-yard TD run.  In a 4th quarter full of momentum swings, Braylon Oliver swung it back to BHP with a 96-yard kickoff return for a 38-35 lead. With 20.6 seconds remaining, Beville hit Mack Braswell for the game winning score and a region title for the Red Raiders.  Beville threw for 421 yards and 4 scores, three going to Ty Hellams, who had 13 catches for 259 yards.  Braswell added 114 yards on 13 catches, none bigger than the game winner.  Greenville will host Blue Ridge in the 1st round of the AAAA playoffs.

The Tigers had a tough night Friday, losing to rival Greer 63-3 and losing senior QB Jake Smith in the process.  Matthew Mason got Greer on the board on a scoop and score of a muffed punt by the Tigers.  Special teams put the Jackets up 14 when Qua White returned a Blue Ridge punt 77-yards.  An Edwin Sales FG extended the lead to 17.  Blue Ridge marched down the field and got on the board with a 33-yard FG.  Greer’s offense got on the board after Trey Houston found White for a 41-yard TD, then Houston found Braxton Collins for 9 yards and a 31-3 lead after one quarter.  Greer opened the 2nd with a pick, a play in which QB Jake Smith wound up down on the field where he had to be carted off and taken to the hospital.  Greer would go up 54-3 at the half and roll to the victory.  The Yellow Jackets had the #1 seed already locked up and they will host Daniel next Friday.  Thoughts are with Tigers Jake Smith as Blue Ridge prepares for the Red Raiders next week.

Eastside, already locked in as the #2 seed out of Region II-AAAAA, had a unique situation as they hosted Wren in a non-region contest to wrap up the regular season.  The Eagles and Hurricane will meet again Friday in the 1st round of the playoffs, so did they decide to play it safe or make a statement?  The Eagles definitely went for make a statement!  After falling behind 7-0, the Eagles rattled off the next 70 points as the Eagles senior playmakers showed out.  Big night on Senior Night for Jordan Morgan, Chance Pride, Payton Mangum, Daniel Baldwin and all the Eagles players.  Eastside and Wren will do it again next Friday and this time there will be a lot more on the line.

Southside was holding onto the 4th seed out of Region II-AAA, but needed a win over rival Carolina to guarantee a playoff berth.  The Tigers took care of business with a 48-6 win.  Southside will be on the road at Fairfield-Central as they return to the playoffs after missing out last season.  Carolina closes out its 2017 season 0-10.

Woodmont was on a bye in Week 10, but the Wildcats paid close attention to the Mann at Easley game.  The Green Wave rolled the Patriots 55-7, locking Woodmont into the #4 seed.  The Wildcats will travel to Dorman Friday night.  Mann ends its 2017 campaign 2-8.

Travelers Rest slim hopes of a playoff berth rested on going on the road and knocking off Union County.  The Devildogs jumped out to a 7-0 lead and kept it close as they trailed 10-7 after the 1st.  Union added a safety, but the Devildogs scored to regain the lead 14-12 on an 80 yard fumble return.  Union scored the next 46 points on their way to a 58-21 win, eliminating TR from the playoffs.

Wade Hampton traveled to Riverside in a Region II-AAAAA matchup to close out the season as both teams were eliminated from the playoffs last week.  JJ Richardson gave the Generals a 7-0 lead, taking the opening kickoff for a score.  Rashad Luckey made it 14-0 on his way to 145 yards rushing.  Riverside cut the lead to 8, but Sophomore QB Cason Whitmire, playing in his first varsity game of the season, found Richardson for a 90-yard TD and a 21-6 lead.  Luckey’s second TD made it 28-6 and the Generals held a 28-14 lead at the half.  Luckey added a third rushing TD and Trey Berry added a rushing TD as the Generals win 42-21.  Wade Hampton finishes the season 3-7.  Riverside closes its 2017 campaign 1-9.

Berea was officially eliminated from the playoffs with the Southside win and their loss to region champion Emerald.  Bigger news for the Bulldogs is the retirement of head coach Wayne Green.  Green started his 32 year career at Berea and made stops at BHP and Seneca before returning to the Bulldogs.  Green wraps up his illustrious career with 212 wins.