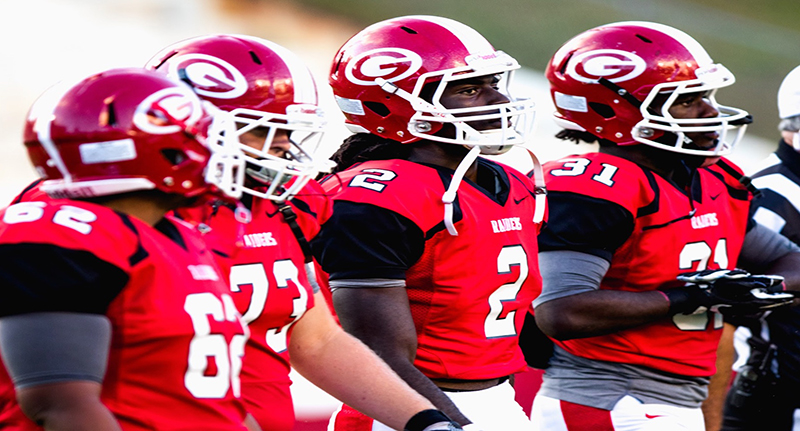 With only three weeks left in the high school football regular season, week 8 is a pivotal week in region play across the county.  However, the matchup of the week may be a non-region tilt between Greer (6-1,2-0) and Greenville (7-0,2-0) at Dooley Field.  The Red Raiders are undefeated and are coming off a huge region win over Wren last week.  Greenville's balanced offense has averaged over 48 points per game this year behind QB Davis Beville and RB Danyaus Williams-Byrd, both among the county leaders in rushing and passing.  The Red Raiders travel to Greer who has averaged nearly 43 points per game.  The Yellow Jackets have an explosive run game powered by Dre Williams, Qua White and QB Trey Houston.  Williams is coming off a 277 yard, three touchdown game vs previously unbeaten Eastside last week.  Greer and Greenville are longtime county rivals and their non-region matchup this week may be a preview of a potential AAAA playoff game down the line as both teams are ranked among the top 10 in the state in Class AAAA.

As far as region games go, it won't get much bigger this week than Hillcrest traveling to Greenwood.  Both are 2-0 in region play and the winner grabs 1st place in Region II-AAAAA all to themselves.  Greenwood is coming off a 28-21 victory at Mauldin where the Eagles put up over 300 yards on the ground.  The Rams (5-2,2-0) defense has been stout the last three weeks, surrendering only 9 points total in the three games.  Hillcrest will need their run defense to be on point this week.  Mauldin had success against the Eagles defense in the passing game, something Will Watts and the Rams offense hopes to exploit.

Mauldin (4-3,1-1) looks to bounce back from their loss to Greenwood as they travel to Wade Hampton (2-5,0-2).  The Generals opened region play with two tough road games at Greenwood and at Laurens.  Back home, the Generals hope to attack the Mavs defense with a run game that has been very effective thus far in region play.  Rashad Luckey and Trey Berry have both been productive on the road.  Wade Hampton hopes to ride their ground game to their first region win.  Mauldin has also been good on the ground, attacking with RB's Raekwon Fenderson and Jason Branham-King as well as QB Mitchell Norman, who is also coming off a 200+ yard passing performance.  Whatever team can slow down the run has a great chance to grab the win in this matchup.

Running the ball and stopping the run will also be the key in a  Region 1-AAAAA matchup between Woodmont (2-6,1-1) and TL Hanna (7-0,2-0).  Both teams utilize a run heavy triple-option attack.  Whichever defense can step up and stop the run will walk away with a big region win.

Berea (2-5,1-1) will turn to their ground game, which features the leading rusher in the county Travis Hagood as they try and pull the upset at home vs region power Palmetto.  The Mustangs bring a balanced offense to Berea and are coming off a huge win vs Southside.  Berea will need to control the clock to try and spring the upset on the Mustangs.

Southside (4-3,1-1) coming off the tough loss at Palmetto, must re-group as they face another tough region test when they host defending region champion Powdersville.  The Tigers control their playoff fate these last three weeks, a win against the Patriots will go a long way to improving their seeding.

In Region II-AAAA, Eastside (6-1,1-1) no longer controls their own destiny in region play, but the Eagles are still looking to secure at least a home playoff game.  QB Jordan Morgan has a stable of offensive weapons and despite last weeks setback at Greer, the Eagles are a dangerous team.  They look to relaunch their aerial attack as they host Travelers Rest (1-6,0-2).  The Devildogs seek their first region win as they battle for one of those four playoff seeds out of Region II-AAAA.

Blue Ridge (3-4,1-0) took a big first step in securing a playoff birth with their win at TR.  This week the Tigers host traditional region power Union County.  The Yellow Jackets are currently 0-7 after a tough non-region slate and loss vs Eastside.  Tigers QB Jake Smith and RB Tyree Cofield hope to keep the Yellow Jackets out of the win column.

In Region II-AAA, Carolina is also seeking its first win of 2017.  The Trojans face a tough task hosting a tough Emerald team who is off to a 2-0 start in region play.  Carolina has had to shuffle players around all season trying to find the right combination on both offense and defense.  Carolina hopes this weeks line-up finally breaks through for a victory.

Riverside (1-6,0-2) has dropped six straight games and hopes to steal a big region win this week at Laurens (2-5,1-1).  The Warriors have gotten big plays out of QB/WR Andrew Brown and RB Max Louris, but the Warrior defense has struggled making stops.  Riverside will need an improved defensive effort as they look to slow down a strong Raider run game.