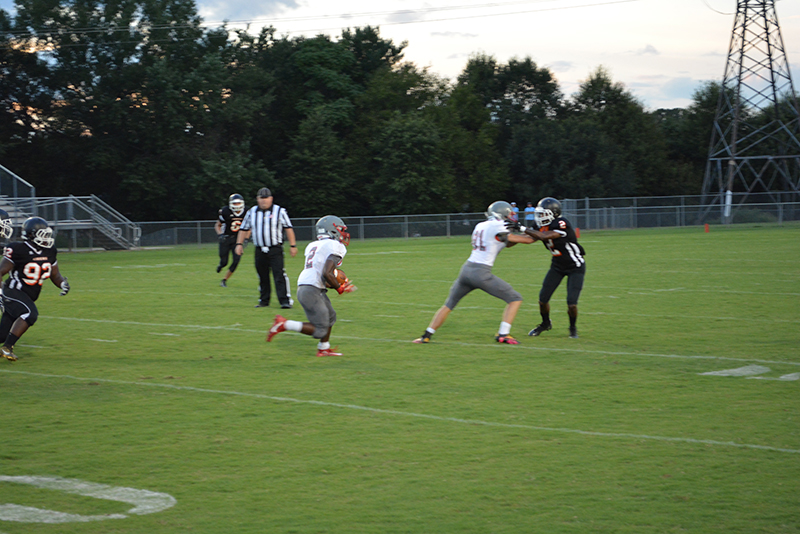 In football, the next game is the most important game of the season.  This week is no different and there are teams this week with a chance to make a major statement in regards to playoff positioning.  Maybe no game bigger than at Dooley Field in Greer, where the 5-1 Yellow Jackets host the undefeated Eastside Eagles.  Both offenses spread you out and have weapons all over the field.  Eastside rolls in with QB Jordan Morgan who leads the county with 1911 passing yards and 23 TD's.  Morgan has weapons all over the field, including Payton Mangrum and Chance Pride who are among the county leaders in receptions and yards this season.  The Eagles defense is no slouch either, holding opponents to 41 total points through six games.  Greer boasts a pretty potent offense of its own, orchestrated by QB Trey Houston who has thrown for over 1000 yards with 14 TD's and 0 interceptions.  Houston has added 4 scores and 300+ yards on the ground, where Dre Williams leads the team with 604 yards, averaging 11 yards per carry.  Mix in WR Qua White who has 8 total TDs rushing and receiving this year.  Eastside vs Greer may be the game that decides 1st place in Region II-AAAA this year.

In Region 1-AAAA, Greenville (6-0) will host Wren (5-1) in another big match-up.  Greenville has used a balanced offensive attack which features RB Danyaus Williams-Byrd who is among the area leaders in rushing with 640 yards and 10 TDs on the season.  Collin Whitfield has added over 400 yards and averages 9.5 yards per carry.  Davis Beville and the passing game has also been really good this season.  Beville has thrown for 1185 yards with 21 TDs and only 2 interceptions.  The Red Raiders will need all their firepower as they host a Wren team led by duel threat QB Tyrell Jackson who is among the area leaders in rushing and passing.

Mauldin (4-2,1-0) hosts traditional upstate power Greenwood (4-1,1-0).  It is Homecoming at Freeman Field, in addition to Spirit Week and one of the better match-ups in the area on the field.  Greenwood struggled a little last week vs Wade Hampton, but put the Generals away for a 42-21 victory.  Mauldin played in a wild game at Riverside which saw an interception for a TD, an onside kick recovery, a kick-off return for a TD, fumbles from both teams and big pass play scores in the pass game.  Mauldin can not afford the mistakes it made on the road last week if the Mavs hope to move to 2-0 in Region II-AAAAA.

Hillcrest (4-2,1-0) also looks to move to 2-0 in Region II-AAAAA after they dismantled defending region champion Laurens last week.  The Rams defense forced seven punts and an interception in the 1st half last week and Donte Anthony rushed for three touchdowns.  Riverside enters this game a little banged up after their game vs Mauldin, but Andrew Brown, Max Louris and the Warrior offense are capable of big plays.  They'll need some of the big play ability as they look to crack a stingy Hillcrest defense.

Wade Hampton (2-4,0-1) opened region play at Greenwood by falling behind by 21 points, but DT Bradley McMillen forced a huge turnover with a strip-sack and fumble recovery and the Generals run attack got on track with Rashad Luckey and Trey Berry as Wade Hampton fought back and had a chance to tie the game in the 3rd quarter before stalling out at their own 5-yard line.  Wade Hampton is again on the road as they look to knock off Laurens for their first region win.

JL Mann (2-4,0-0) took advantage of their bye week last week to start to prepare for Woodmont (1-6,0-1) and their triple-option ground attack.  The Wildcats controlled their region opener against defending region champion Westside for three quarters.  Woodmont defense held firm, forcing the Rams into three field goals and only 9 points heading to the 4th.  Woodmont held a 13-9 lead in the 4th, but then the Ram offense got on track and the Wildcats fell 30-13.  Woodmont looks to finish strong this week as the winner of this game will go a long way to determine which teams grab the top four seeds out of Region I-AAAAA.

Blue Ridge (2-4,0-0) also had the advantage of a bye last week as they look to open region play on the road at Travelers Rest (1-5,0-1).  The Devildogs struggled vs region power Greer last week, surrendering 70 points in the loss.  Blue Ridge, which has struggled the last few weeks scoring the ball, hopes to take advantage of the Devildogs defense in this Region II-AAAA match-up.

Southside  has already doubled last season win total with their 4-2 start.  More importantly, the Tigers grabbed a big region victory over Berea to start region play 1-0.  Southside will travel to Palmetto who was a pre-season favorite by many in Region II-AAA.

Berea (1-5,0-1) hopes to secure their first region win vs Carolina at home this week.  The Trojans are simply looking for a win, as they are off to an 0-6 start in 2017.  The winner between these neighboring rivals puts themselves right back into the hunt in Region II-AAA, while the loser will find themselves in a huge 0-2 hole with only three games remaining to dig out.

All 14 GCS teams are in action tonight.  Looks to be a great night for some high school football!