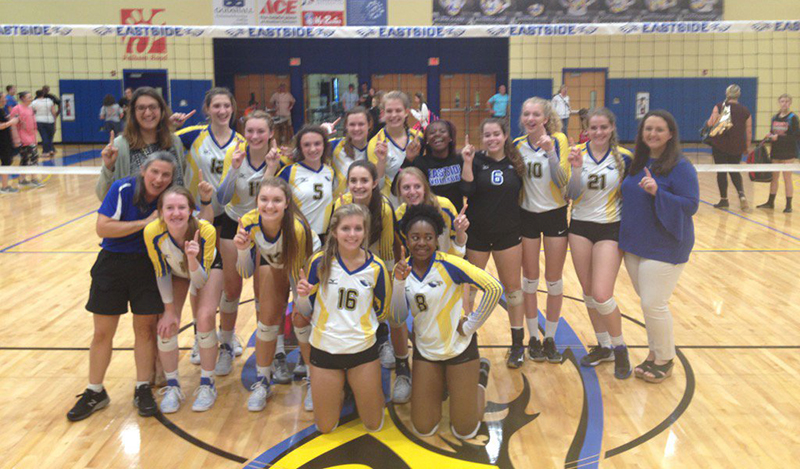 It came down to the final match of the season between two longtime rivals to secure the #1 seed out of Region II-AAAAA for the 2017 AAAAA Volleyball Playoffs.  Mauldin defeated Hillcrest as the two split their season series with the Mavericks winning the tie-breaker.  Mauldin grabs the #1 seed and opens the AAAAA playoffs on Thursday, October 19th at home vs Clover (#4).  The winner of that match will meet the winner of #2 Spartanburg and #3 Woodmont in the second round.  Also in this bracket, #2 Byrnes squares off with #3 JL Mann and the winner faces the winner of #1 Nation Ford and #4 Riverside.  In the top part of the Upper State bracket, #2 Hillcrest hosts #3 Fort Mill.  #3 seed Wade Hampton travels to #2 Rock Hill.  AAAAA playoffs start October 19th.

Eastside is once again a region champion.  The Eagles claim the #1 seed out of Region II-AAAA and will host #4 seed Wren.  Eastside hopes to get a shot against Upstate power Pickens who is the #1 seed out of Region 1-AAAA.  The Blue Flame open vs #4 seed Travelers Rest who earned their spot on the final day of the regular season with a win over Union County.  Pickens and Eastside could be on a collision course to meet for a chance at the Upper State title game.  In the lower half of the bracket, #2 seed Greenville hosts #3 Greer and #2 Blue Ridge welcomes #3 Daniel.  AAAA playoffs begin October 19th.