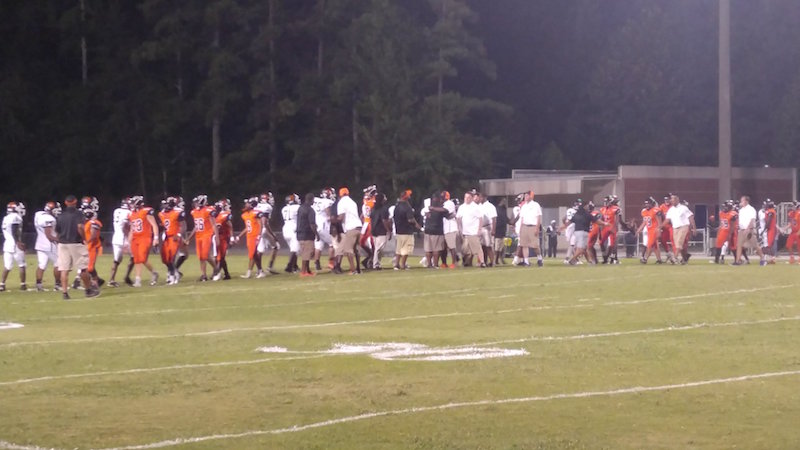 We've reached the region portion of the high school football season.  Region play determines playoff seeding and every game matters a little bit more.  An important game in Region 2-AAA happened at Southside as the Tigers (3-2) hosted Berea (1-4).  In 2016 the Tigers won only two games and a loss at the Bulldogs basically knocked the Tigers out of the playoffs.  The Tigers have already won more games this year and last night they defeated Berea 28-18, a good first step toward trying to secure a playoff spot.

A big game in Region 2-AAAA featured Eastside vs defending region champion Union County.  The Eagles are off to a 5-0 start and are sitting just outside the Class AAAA Top 10.  Eastside missed a scoring opportunity on its opening drive, but LB Israel Taylor scooped up a Union fumble and QB Jordan Morgan connected with Haven Berry to put the Eagles on top 7-0.  Morgan made it 14-0 when he hit Payton Mangrum for a 6 yard score.  Chance Pride extended the lead to 21 with a 2-yard TD early in the 2nd.  Union got a 4-yard TD run from DeShaun Holmes to make it 21-7 at the half.  The Eagles defense, which has been stout all year, forced a 3-and-out on the Yellow Jackets opening possession of the 2nd half and the ensuing punt was returned 51 yards for a TD by Chance Pride.  Morgan would add another big play, hitting Mangrum for a 50 yard TD and a 34-7 lead.  After a Union score, Pride added another rushing TD to make it 41-14 after 3.  Reggie Rogers added a late score and the Eagles moved to 1-0 in region play with a huge 48-20 win over Union.  Jordan Morgan went 33/47 for 465 yards and 3 TDs to lead Eastside to its first ever win vs Union County.  Payton Mangrum and Chance Pride each grabbed 11 receptions.  Mangrum grabbed 2 TDs and Pride accounted for 3.  The Eagles (6-0) have a huge road game next week at Greer.

Greer is off to a 5-1 start and rolled in its region opener at Travelers Rest 70-3.  The Yellow Jackets opened with six straight throws and Trey Houston found Qua White for a 21 yard TD.  The Devildogs answered with a 23 yard FG, but it was all Greer after that.  RB Dre Williams pushed the lead to 14-3 and after a TR fumble, Houston hit Braxton Collins to make it 21-3 after 1.  Williams opened the 2nd quarter with a 78 yard TD run and after another Devildog turnover, Houston again hit Collins for a score.  Whites 32 yard TD reception  pushed the lead to 39 points and the Yellow Jackets scored a 57 yard TD from Houston to Cam Martin, the fourth 1-play scoring drive of the half.  Any doubt about the 2nd half was solved 8 seconds in when Jacob Harris took an interception 75 yards for a score.  Edwin Sales went 10-10 on PAT's.  Greer hosts Eastside in a game that may decide Region 2-AAAA.  Travelers Rest will try and bounce back at home vs Blue Ridge.

Hillcrest opened region play on the road at defending Region 2-AAAAA champ Laurens.  The Rams defense dominated the night, forcing the Raiders to punt on seven straight possessions and getting an interception on the eighth on the final play of the half.  Donte Anthony put the Rams up 7-0 with a short TD run to close a 10 play 64 yard drive.  On 3rd and 9, Will Watts hit Trey Adkins in the flat and Adkins raced 72 yards to push the lead to 14.  Anthony added another score as Hillcrest held a 20-0 lead after 1st.  On 4th and 6 to open the 2nd, Watts gave it to Braden Maloy who pulled up for the double pass and Maloy hit Adkins for a 37 yard TD.  Watts hit Steven Cambell to make it 32-0 and Anthony's third rushing TD pushed the lead to 39-0 at the half.  Laurens added a late FG as Hillcrest won 39-3 and moves to 1-0 in region play.  The Rams (4-2) will host Riverside next Friday.

The Warriors hosted Mauldin to open region play.  It was a strange night at the Reservation which featured an interception return TD, a kick-off return TD, an onside recovery, a blocked punt, turnovers and penalties.  A lot of big penalties as the teams combined for over 150 yards lost to yellow flags.  Malik Ford put the Mavericks on the board with a 26 yard interception return for a TD and Mauldin got the ball right back after recovering an onside kick.  Mauldin was unable to capitalize, turning the ball over on downs at the 5-yard line.  One play later the Mavs got the ball back when Ford forced a fumble recovered by Mauldin.  Mitchell Norman finished off the short drive with a 1-yard TD and 14-0 Mavs lead.  After exchanging punts, the Warriors cut the lead in half when Max Louris hauled in a 40 yard TD.  Riverside got the ball back on a fumbled kick-off return and Mauldin forced a FG attempt.  Riverside missed the try, but Mauldin roughed the snapper setting up the Warriors to cut the lead to 14-13 after a Ryan Perron TD.  The point-after dinged off the upright.  After trading possessions, Mauldin got great field position when Doyle Hedgpeth blocked a punt and Shawn Livingston capped off the short drive with a 3-yard TD.  Riverside answered right back when Max Louris raced 72 yards on the ensuing kick-off.  After a Warrior punt, the game went into a 30 minute delay as paramedics were called to the field to respond to an injury.  When play resumed Mitchell Norman added a 10 yard run and Ben Dority kicked a 26 yard FG to give the Mavs a 31-20 lead at the half.  Mauldin opened the 2nd half with an interception, Riverside responded with a fumble on the next play and Mauldin returned the favor after a seven play drive ended with a fumble.  After the series of turnovers, penalties started to take over the game and lead to a scoreless 3rd quarter.  In the 4th, Mauldin added a rushing TD by Cris Paez and a 45 yard TD from Norman to Jake Tribble which gave the Mavs a 44-20 lead.  Andrew Brown added a late score for the 44-26 final.  Bigger than the game, the young man rushed to the hospital is improving according to the latest reports, and will be undergoing more tests over the next few days.  Riverside (1-5) will travel to Hillcrest next week.  Mauldin (4-2) will host Greenwood.

Region 2-AAAAA power Greenwood hosted Wade Hampton.  The Eagles raced out to a 21-0 lead and looked to be in cruise control early.  JJ Richardson gave the Generals some momentum with a kick-off return TD to cut the lead to 21-7 before the half.  Bradley McMillen opened the 2nd half with a strip sack and gave the Generals excellent field position.  Eric Reece punched it in and the lead was cut to 21-14.  Will Edwards intercepted a deflected pass and Wade Hampton had the chance to tie the game, but stalled at the 5-yard line.  A throwback pass by Greenwood extended the lead to 28-14 to end the 3rd.  The Eagles opened the 4th with another score and a 35-14 lead.  Rashad Luckey scored to make it 35-21, but the Eagles would answer for the 42-21 win.  Wade Hampton (2-4) will travel to Laurens next Friday.

Greenville looks to be a force in Region 1-AAAA and the Red Raiders opened at Pickens.  Danyaus Williams-Byrd scored two rushing TDs to give the Raiders a 14-7 lead after 1.  Davis Beville opened the 2nd with a screen to Collin Whitfield to make it 21-7 and then Beville went over the top for a 35 yard strike to Mack Braswell.  Beville added two more TD strikes to Braswell and Greenville defeated Pickens 42-14.  The Red Raiders (6-0) will host Wren next Friday.

Woodmont hopes to surprise some teams in Region 1-AAAAA.  The Wildcats opened on the road at defending region champion Westside.  The Rams took an early 3-0 lead after the 1st.  Woodmont's ball control ground game took control early in the 2nd and gave the Wildcats a 7-3 lead.  Westside answered with another FG, but Woodmont held onto a 7-6 halftime lead.  Another Westside FG gave the Rams a 9-7 lead.  With :22 seconds left in the 3rd, Woodmont regained the lead 13-9 heading to the 4th.  The 4th quarter belonged to the Rams as Westside took the lead following a Wildcat fumble and then returned a Woodmont punt 60 yards for a score and a 30-13 win.  Woodmont (1-6) will host JL Mann next Friday.

Carolina opened their region slate at defending Region 2-AAA champion Powdersville.  The Patriots dominated the night and pushed the Trojans to 0-6 on the season with a 56-0 win.  Carolina will seek that elusive first win on the road at neighboring rival Berea.

JL Mann and Blue Ridge were on byes this week.  Mann travels to Woodmont to open region play.  Blue Ridge will head to Travelers Rest.