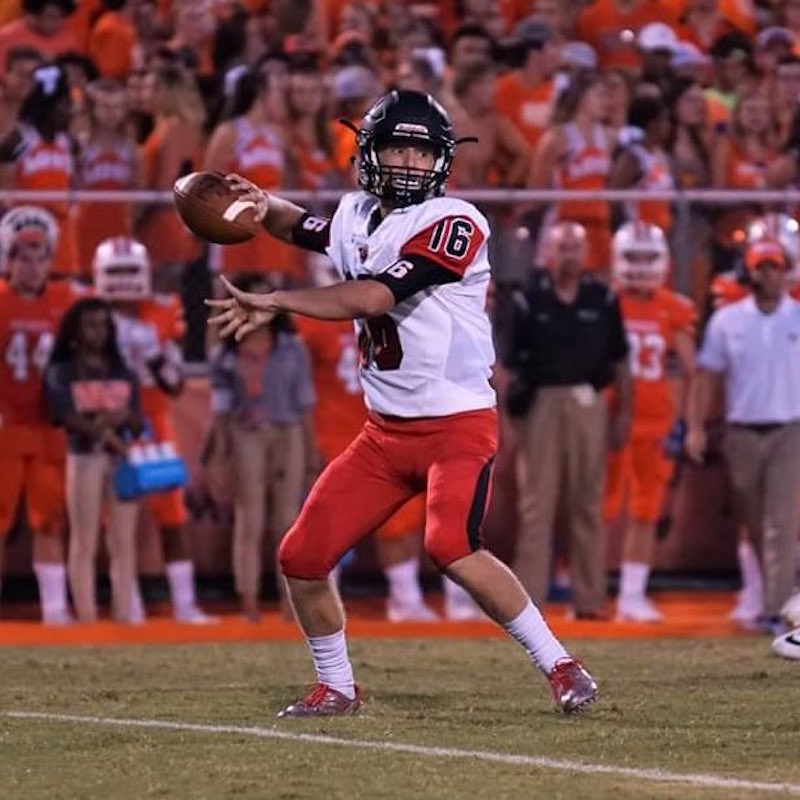 Friday was the last non-region tune-up for most GCS teams.  Next week region play starts and teams will be fighting for playoff seeds.  A win this week would be a springboard heading into region play.  Two teams desperately needing a win squared off at JL Mann, as the Patriots hosted Riverside.  Both teams opened the season with a victory in Week 0, but neither has celebrated a W since.  Mann, on a four game losing streak has struggled on defense giving up 57 points a game during the streak.  Riverside, on its own three game skid, lost a heartbreaker in the final seconds to Blue Ridge  27-28 in Week 2 and battled back and forth with Christ Church last week.  Both teams, hungry for a win, gave us the game of the week!  Mann scored first, but the Warriors Max Louris scored the first of his two TDs to tie the game at 7 after one.  The teams traded scores, combining for 28 points in a 7-minute span to end the half tied at 21.  The Patriots regained the lead in the 3rd.  QB Andrew Brown scored, but the Patriots blocked a PAT and maintained a slim 28-27 lead.  Mann extended their lead to 8 with 4:15 left in the 4th.  Andrew Brown found Kodi Jones for the Warriors, but the 2-point attempt failed and Mann was able to hold on for the 35-33 victory.  Mann moves to 2-4 on the season and will be on a bye next Friday before traveling to Woodmont to open their Region 1-AAAAA slate.  Riverside falls to 1-4.  The Warriors open play in Region 2-AAAAA at home vs Mauldin.

The Mavericks closed their non-region slate with a home game vs Blue Ridge.  The Tigers won the toss and elected to receive, Mauldin followed with an onside kick recovery and Mitchell Norman capped off the short drive with a 13 yard TD run.  Mauldin went up 14-0 when Norman, the starting QB, slid out to WR and hauled in a 6-yard pass from Sophomore Stone Watson.  After the defense forced a 3-and-out, the Mavs drove down to the 1-yard line, but a mishandled snap led to a turnover.  Two plays later the Mavs defense answered with a safety.  This would not be the last score for the Mavs defense.  Norman added another rushing TD and Raekwon Fenderson returned a punt 50 yards as Mavs raced out to a 36-0 halftime lead.  In the 2nd half, Mauldin's defense would score all 14 points as Andru Phillips recovered a muffed punt in the endzone and Mike Lynch scooped up a Tiger fumble and raced 64 yards to close out the scoring.  Mauldin moves to 3-2 on the season.  Blue Ridge (2-4) is on a bye and will head to Travelers Rest to open their Region 2-AAAA slate.

Travelers Rest had a bye, coming off their first win of the season two weeks ago.  They traveled to Southside who had a rough home opener the week before.  The Tigers performed much better in their second home game.  The Tigers staked a 19-10 halftime lead and extended that lead to 32-17 after 3.  The Devildogs were never able to close the gap as Southside held on for the 40-24 win.  Travelers Rest (1-4) opens their region schedule at home vs region power Greer (5-1).  Southside (3-2) will open Region 2-AAA play at home vs Berea.

Coming off a tough loss at Chesnee last week, the Bulldogs traveled to Wade Hampton.  The Generals are coming off their first win of the season.  Trey Berry got things going for the Generals with a TD run and Sebastian Garcia added a 42 yard FG to give the Mavs a 10-0 lead in the 1st.  Another Garcia FG would push the lead to 13 at the half.  Berry added a 70 yard TD run and Rashad Lucky added another rushing TD as the Generals won their second game in a row 25-0 over the Bulldogs.  Berea falls to 1-4.  Wade Hampton opens their Region 2-AAAAA schedule at Greenwood.

Greenville moved to 5-0 on the season with a 32-0 win over Easley.  The Red Raiders offense has been a juggernaut thus far, but against the Green Wave it was the Greenville defense which really showed out.  The Red Raiders held Easley to 119 total yards and 6 first downs.  Davis Beville got Greenville on the board with a 20 yard strike to Jack Henegan.  Beville then found Danyaus Williams-Byrd for an 8 yard score and a 15-0 lead after the successful 2-point play.  The Red Raiders tacked on a FG before half to make it 18-0.  Beville would add a 3rd passing TD.  Greenville will travel to Pickens to open its Region 1-AAAA slate.

Unbeaten Eastside took little time to dispatch of winless Carolina on the road.  QB Jordan Morgan opened the game 2-2 with 2 TDs and the route was on.  Quez Brown ended the 1st quarter with a pick 6 as time expired and the Eagles held a 48-0 lead after one quarter.  Eastside would go on for the 69-0 win.  It's the third straight shutout For the Eagles defense.  Eastside (5-0) is on the fringe of the Class AAAA Top 10 and will have a chance to make a big statement next week at home vs Region 2-AAAA power Union County.  Carolina will be at home vs Region 2-AAA foe Powdersville.

Former region rivals Hillcrest and Woodmont met in their final non-region tune-up.  The Rams dominated the 1st half, Will Watts connected with Jeremiah Talbert to put Hillcrest up 7-0.  Another Watts to Talbert strike pushed the lead to 14 after 1.  Colin Whitfield pushed the lead to 21 with a 52 yard run.  Woodmont's ball control run game dominated the 2nd half, but the Wildcats could only find the endzone once as Hillcrest held on for the 21-6 win.  Woodmont (1-5) will open Region 1-AAAAA play on the road at Westside.  Hillcrest travels to Laurens, last seasons Region 2-AAAAA champions.