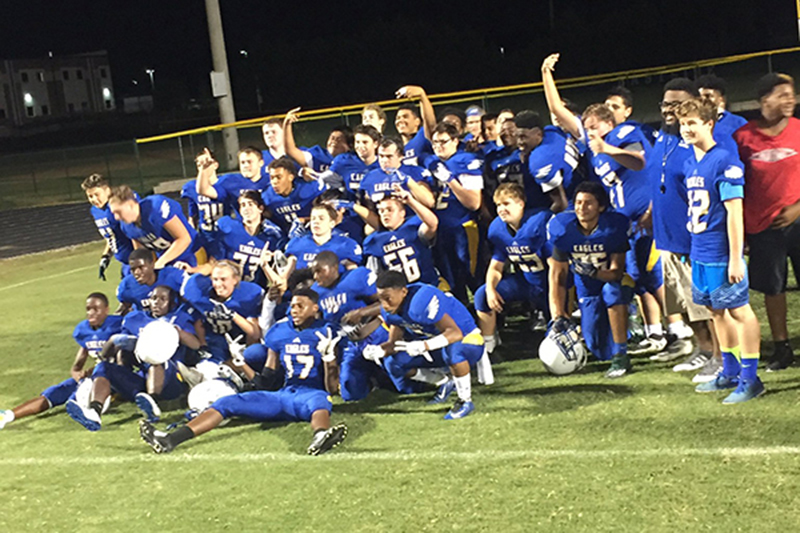 As we reach the midpoint of the high school football season, GCS teams are wrapping up the non-region part of their schedules.  Hillcrest (2-2) wraps up their non-region play vs former region rival Woodmont (1-4).  Despite their record, the Wildcats have shown weekly improvement running new head coach Jet Turner's option offense.  The Rams defense which struggled to contain Gaffney last week will be tested against Keshun Kilgore and the Wildcat ground attack.  On defense, Woodmont will have to contend with QB Will Watts, who is among the county leaders in passing this season.  Watts has weapons on the outside in receivers Jeremiah Talbert and Steven Campbell.

Mauldin (2-2) wraps up their non-region slate at home vs Blue Ridge (2-3).  The Tigers are coming off a rough loss to defending state champion Chapman.  The Mavs had the chance to take a 4th quarter lead vs unbeaten TL Hanna, but failed to convert a 4th and goal.  Mauldin has had its struggles scoring in the redzone, an area they hope to improve on this week before starting region play.  The Tigers will look to their veterans Jake Smith at quarterback and Tyree Cofield at running back to put pressure on the Mavs to have to match scores.  Mauldin's defense has played well thus far, but has been susceptible to big plays, an area Smith and Cofield hope to exploit.

Eastside also has it going on both sides of the football this year.  The unbeaten Eagles have played 16 quarters of football and have given up points in only three of those quarters.  Meanwhile the offense is averaging 46 points a game.  QB Jordan Morgan leads the county with 15 TDs and he has a stable of weapons to throw to, including Chance Pride and Payton Mangrum who have 11 TD receptions between them.  The Eagles travel to winless Carolina where they will be heavy favorites.

Wade Hampton broke out of their winless streak with a huge 60-0 win over Carolina last week.  QB Jackson Elgin threw 5 TDs to five different receivers and RB Trey Berry added 112 yards and a score.  Wade Hampton will look to build off that big win as they host Berea (1-3) who lost a heartbreaker on the road last week.  The ball took some funny bounces for the Bulldogs, who lost a couple fumbles early to set-up scores for Chesnee.  Berea also recovered one of their own fumbles for a score.  Despite the early bobbles, the Bulldogs had the ball and were driving for the winning score.  As time expired Berea RB Travis Hagood was tackled at the 1-yard line and Berea fell just short.  Hagood, among the county leaders in rushing, will be pushing for that extra yard this week against a Generals run defense that has improved each week.

Two teams enter Friday looking to end losing streaks of their own.  JL Mann opened the season with a win, but have dropped four straight and are surrendering over 40 points a game during that stretch.  The Patriots (1-4) will face Riverside (1-3) who is on their own three game losing streak after a Week 0 win.  The Warriors have been close, losing in the closing seconds to Blue Ridge two weeks ago and hanging with Christ Church a week ago.  Both teams will be hungry for a win as they prepare for region play.

After notching their first win of the season two weeks ago, Travelers Rest (1-3) had a bye last week to give themselves extra time to prepare for Southside (2-2).  The Tigers opened with three straight road games and were anticipating their home opener last week.  From a malfunctioning scoreboard to an explosive Eastside offense, things did not go well for the Tigers.  Southside will be looking to give their home fans a better show as they host the Devildogs this week.

Greer (4-1) is on a bye this week.  The Yellow Jackets will open region play on the road at Travelers Rest next week.