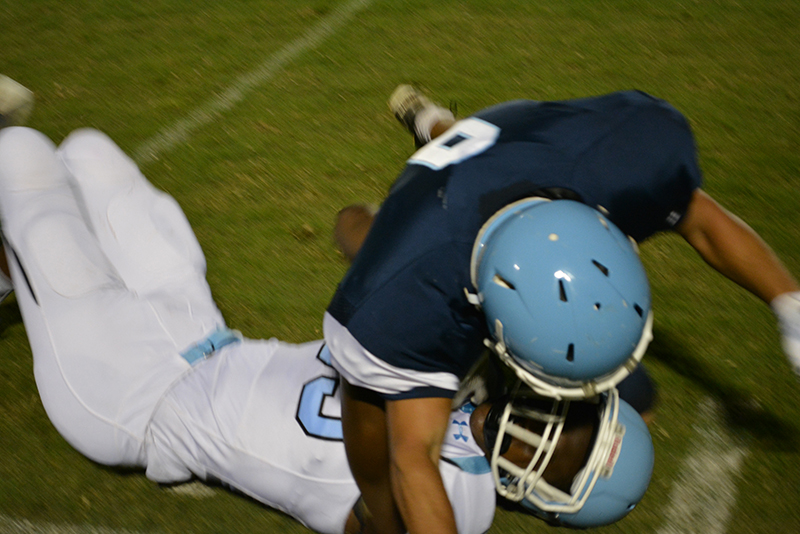 Hurricane Irma rolled through the Upstate causing school cancellations on Monday and Tuesday, which also caused the cancellation of practices for high school teams preparing for week 4 action.  Despite the short prep week, high school football rolls on and for Greenville and JL Mann it is Rivalry Week!   The Patriots (1-3) have struggled on defense the past three weeks, not ideal when facing Davis Beville and the Red Raiders offense which has averaged 51 points a game to start the season 3-0.  However, in a rivalry game like Mann vs Greenville, what has happened the past three weeks will have little impact on what happens at Sirrine Stadium on Friday night.

Another offense off to a fantastic start is the high flying Eagles offense over at Eastside.  QB Jordan Morgan has 12 TD passes on the season as the Eagles have averaged 46 points a game.  To compliment the #TalonsUp aerial attack, the Eagles defense has only given up three scores on the season and has shut-out their opponent in 10 of the 12 quarters played this year.  Eastside will travel to Southside, which is off to a 2-1 start after back to back road wins where their defense has played exceptionally well.

Hillcrest (2-1) will travel to The Reservation to face the Gaffney Indians (1-2).  The Rams 1st year QB Will Watts has found his groove and earned Greenville News Player of the Week honors for his 400 yards passing vs JL Mann last week.  The Rams are adjusting to life without star WR Quendarius Jefferson, who has been out since a week 1 injury.  Watts has turned to Steven Campbell and track star Jeremiah Talbert to power the Rams passing attack.  Despite the offensive improvements since week 1, the Rams defense may hold the key to victory as LB Garrett Sayegh and crew will be asked to shut down an athletic Gaffney squad.

Woodmont (1-3) fell just short on the road at Mauldin last week, but the Wildcats continue to improve week after week under fist year head coach Jet Turner and his triple option rushing attack.  QB Cole Fendley continues to master the intricate offense and wingback Keyshun Kilgore is a threat to score every time he touches the ball, including through the air where Kilgore threw for the opening score of the game last week.  Woodmont will need another strong performance from their defense led by LB's Jonus Martin and Isaiah McCullough as they host rival Wren (2-1) Friday night.

A week after holding off Woodmont's triple option attack, the Mauldin Mavericks (2-1) will face another potent option team as they travel to Anderson to face TL Hanna.  The Yellow Jackets are off to one of the best starts in the state, 4-0 with wins over Gaffney, Boiling Springs, Spartanburg and BHP.   The Mavs defense has been good about forcing turnovers all season and will look to attack the Hanna attack.  On offense, QB Mitchell Norman will lead a Mavs offense that has been up and down all season.  They'll need to be up this week and limit mistakes to take down the Yellow Jackets.

Another Yellow Jackets team off to a great start resides in Greer, where they are off to a 3-1 start and will play host to Woodruff (2-2).  Greer has averaged nearly 42 points a game in their three road wins, but only scored 7 in their lone home game, a loss vs Byrnes.  Trey Houston, Dre Williams and Quavian White will look to put on a better show for the home fans at Dooley Field this Friday night.

Down the road from Greer, Blue Ridge (2-2) faces a tough task as they travel to defending state champion Chapman.  The Panthers are off to a 4-0 start and Blue Ridge will need to rely on their experienced backfield, QB Jake Smith and RB Tyree Cofield, as they look to pull the upset in Chapman.

Riverside (1-2) has had an extra week to reflect on their last second loss to Blue Ridge.  Coming off the bye, the Warriors will look to get back in the win column as they travel to Christ Church.  Riverside will rely on versatile senior Andrew Brown and young RB Max Louris as they face the Cavaliers.

Berea (1-2), which has two of the top rushers in county in Trap Hagood and Sincere Allah-Fuller, looks to get their ground game in gear and find a way to score to points as they travel to Chesnee (2-2) this week.

Two GCS schools will be looking for their first win of the season as they square off this Friday.  Wade Hampton (0-3) has had a tough start facing 4A powers Greenville and Eastside early this year.  The Generals will look to get young RB Trey Berry going as they face Carolina (0-3).  The Trojans come in to this week a little shorthanded.

Travelers Rest got their first W of the season last Friday and will have an extra week to enjoy that win as they are on a bye this week.