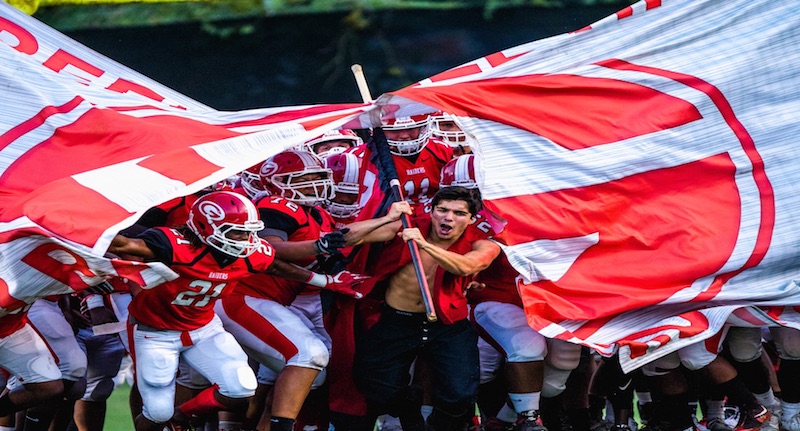 Heading into Week 3 of the 3017 season several GCS teams are starting to make a name for themselves as we inch closer to region play.  Greenville has used its 2-0 start to climb to #9 in the Class AAAA SC Prep Football Media Poll.  The Red Raiders take their balanced offensive attack to Christ Church this week.  QB Davis Beville is coming off a 6 TD performance last week vs Carolina.

Greer (2-1) maintains its Top 10 status in the Class AAAA poll, currently sitting at #7, after their victory over Clinton last week.  The Yellow Jackets face another traditional power as they travel to Daniel (1-2) this week.  QB Trey Houston combined for 4 TDs vs Clinton and the Yellow Jackets will look to ride their high powered run game as they take on the Lions.

Sitting at 2-0, Eastside is on the fringe of breaking into the Class AAAA Top 10.  They will host rival Wade Hampton (0-2) this week.  The Generals will be tasked with slowing down the Eagles aerial attack.  QB Jordan Morgan leads the county in TD passes with 10 after two games.  The Generals will counter with their ground game led by Trey Berry.

Mauldin (1-1)  and Woodmont (1-2) are both coming off a week in which their new head coaches got their first program wins.  Mauldin put up 60 points against JL Mann, while the Mavs defense forced four turnovers.  Woodmont used a pair of turnovers, pick 6 interceptions, to get the win vs Wade Hampton.

JL Mann (1-2) will make their first road trip of the season as they head down 276 to Hillcrest (1-1).  The Patriots will look to rebound from a poor performance last week.  The Rams played well against Dorman, but special teams mistakes proved costly.  Young QB Will Watts continues to improve as the Rams look for options to replace star WR Quendarius Jefferson who is sidelined the next few weeks with an injury.

Berea (1-1) will host Pendleton (2-1) in a battle of the Bulldogs.  Berea's ground game was impressive in their win over Travelers Rest.  They are coming off a bye week to get ready for Pendleton who is off to a strong start this season.

Travelers Rest  (0-3) travels to Carolina (0-2) where both teams look to notch their fist W of the season.

Blue Ridge (2-1) is coming off a furious 4th quarter rally to beat Riverside 28-27.  The Tigers converted the go ahead score and 2-point conversion with only :11 seconds remaining.  RB Tyree Cofield rushed for 180 yards and two TDs and added the game winning conversion in that game.  Cofield and Senior QB Jake Smith will look to keep the Tigers rolling as they face a strong Liberty (2-1) team.

Southside (1-1) knocked off rival Carolina in Week 1.  QB Jalon Calhoun threw 4 TDs in that game.  Coming off a bye week, the Tigers and Calhoun will look to build off that momentum as they travel to an always difficult Blacksburg (0-2).

Riverside is on a bye this week.