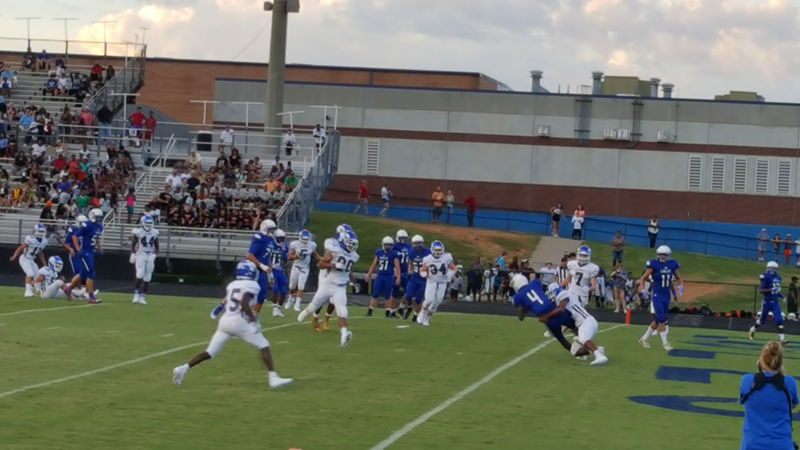 Week 0 is in the books and several GCS football teams made a statement with victories to open their 2017 campaign.

The Week 0 GCS Game of the Week featured new head coaches Dan Morgan, Eastside, and Jet Turner, Woodmont, squaring off versus each other.  Morgan and his Eagles got the better of the match-up as their aerial assault raced away from the ground and pound Wildcat offense.  Senior quarterback Jordan Morgan completed 14-18 for 201 yards and 4 TDs, also adding a rushing score to his day as the Eagles cruised to a 41-7 victory, scoring all 41 of their points in the 1st half.  The Eagles were missing senior Chance Pride, but got contributions from receivers Payton Mangrum (3 TDs), Daniel Baldwin (1 TD), Armani Elmore, Haven Berry and Trent Bowman to go with a solid night rushing from RB Reggie Rogers.  The Eagles defense also scored when Kamren Proctor scooped up a fumble and raced 35 yards for a score.  Mistakes by the Wildcats , including 3 turnovers that led to 21 points in a 3-minute stretch, sealed the fate for Woodmont as their only score came in the 2nd half with Eastside cruising.

Over in Anderson, the Greer Yellow Jackets once again established themselves as one of the best AAAA teams in the state as they ran over the Westside Rams.  Dre Williams rushed for 141 yards and 2 TDS, teaming with Quavian White to feature a balanced rushing attack.  QB Trey Houston added 2 TDs through the air going 16-21 for 156 yards.

Another new head coach in GCS recorded his first career victory as Kevin Burnette and his JL Mann Patriots defeated Southside 20-7.  In another GCS match-up, Riverside overcame a 13-0 deficit to defeat Travelers Rest 21-13.  Berea (at Seneca) and Blue Ridge (vs BHP) both fell short in their opening contests.