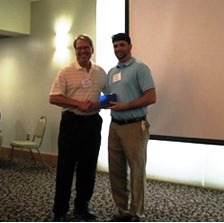 Berklich has placed energy conservation in one of the state’s largest school district at the forefront. As a behavior modification, training, and instructional design professional, he has taken steps to make adjustments to an entity that energy managers cannot directly control – the energy use of organizational stakeholders. Berklich visited all 100+ District facilities to ensure that each and every electricity meter, light, etc. that was present on the utility bill was still in proper working condition and was needed. From that information he created digital maps of each facility to pin-point the location of every meter and leased light for quick and efficient diagnosis and repair in the future. Through this project, the District was able to have unnecessary meters (water, electric, and gas) and over 700 leased lights removed from the utility bills.

Berklich has designed training seminars to educate principals, faculty, staff, and other external partners about the specifics of the energy conservation program. Topics of these training seminars include: energy saving suggestions and recommendations, current and completed projects implemented by the energy management department, Greenville County Schools’ energy consumption and savings data, and other energy conservation resources. The training classes were eventually filmed and used as online training video for all faculty and staff of the District.

Finally, Berklich designed, proposed, and successfully implemented an incentive program that awards top performing schools for their energy conservation efforts on a monthly, quarterly, and yearly basis. This incentive has successfully stimulated ownership of the program and fostered competition to increase motivation to conserve more energy.

Tim Berklich has recognized that to successfully decrease annual consumption, all employees need to understand the magnitude of energy conservation, the basics of operation of energy consuming equipment, the reasoning behind the energy conservation tactics that have been implemented, and the importance of committing to using energy resources in the most efficient manner possible. He has exercised initiative and creativity to effectively educate and motivate the employees of Greenville County Schools to adopt energy efficient habits and routines. Further, Berklich helped Greenville County Schools achieve Energy Star Ratings at over 40 of the facilities in the district; more than all other k-12 districts in the state combined. The programs that Berklich put into place resulted in an annual cost savings that exceeds $2,000,000 per year.